The Assistant Foreign and Expatriates Minister Ayman Sousan claimed Syria has nearly triumphed over conspiracy, which means no one can impose anything on it against its national interests, according to SANA. 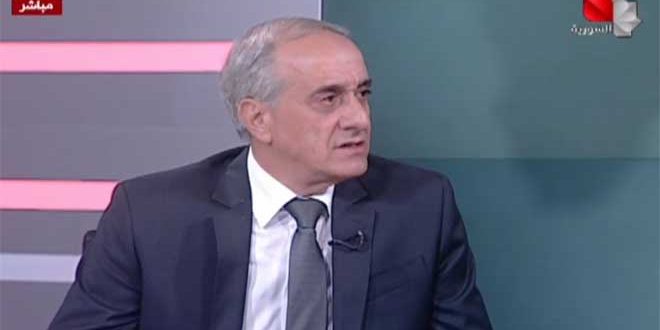 “No one can impose anything on Syria that does not take into account its national interests, particularly after the achievements made in the war against terrorism,” Assistant Foreign and Expatriates Minister Ayman Sousan said.

He was talking to the national television al-Suriya.

“The international change towards Syria has been due to the failure of the American-Western project thanks to the resilience and sacrifices of the Syrians and the support provided by the allies who dealt a heavy blow to the unipolar system and reinforced Russia’s role in the international arena,” Sousan told the Syrian channel.

He stressed that the situation in Syria today is incomparable with what it used to be during the years of the unjust war imposed on the country, particularly after the great achievements made by the Syrian Arab Army in the fight against terrorism.

“The countries have begun to open channels of communication with Syria, even many have the desire and the will to do so, and they do not declare it publicly for their reasons. Therefore, if these understandings mature and materialize, they will lead to advances that will be in the interest of consolidating stability and strengthening international peace and security,” said the diplomat.

Sousan added, “After the sacrifices and achievements made in the war against terrorism, no one can impose anything on Syria against its national interests.”

On the other hand, he referred to the meetings held by the Syrian delegation during the 76th session of the United Nations General Assembly, which amounted to more than 25 with Ministers of Foreign Affairs, in addition to 5 meetings with the Secretary-General of the United Nations and other officials from international organizations.

“This issue in itself is very important because it broke the wall of isolation that they tried to impose on Syria within the framework of political and diplomatic pressure,” he said.

He stressed that these meetings are of great importance, not only in terms of numbers, but also in terms of quality, and pointed out that there are meetings that were held for the first time with some delegations.

The American project in Syria failed.

He noted that the U.S. project in Syria has failed. “We began to hear many voices within the United States, especially in the Congress, calling for the withdrawal of the forces, and under the Charter of the United Nations, Syria has the right to liberate its lands by all available means, and these forces must leave Syria unconditionally”, he added.

Sanctions are the main cause for Syrians’ suffering

“Those who lament the suffering of the Syrians, are the main cause of this suffering as a result of their measures that target the citizens,” he clarified.

He added that sanctions were tightened amid the outbreak of the Covid-19 pandemic, preventing the provision of the necessary medical care to many people.

Syria is very close to achieving the final victory over conspiracy

In response to a question about the possibility of Syria’s return to the Arab League, Sousan said: “Despite the pain and hurt caused by some Arabs, Syria has been aware that the idea of Arabism was the target of this war, that’s why we adhere to this idea and this belonging because we consider it as the fortress to protect Syria.”

“Syria looks to the future and not to the past, and the measures taken by the Arab League were the result of a wrong legal process and a political position, and if this mistake is corrected and new approaches are adopted, things will return to normal,” Sousan added.

He concluded by affirming that Syria is very close to achieving the final victory over conspiracy hatched against it and that after the achievements made against terrorism, the time has come to reap political and diplomatic achievements.