On Wednesday, the Jaber-Nasib border crossing between Syria and Jordan was reopened for trade and travel, according to the Syria Times. 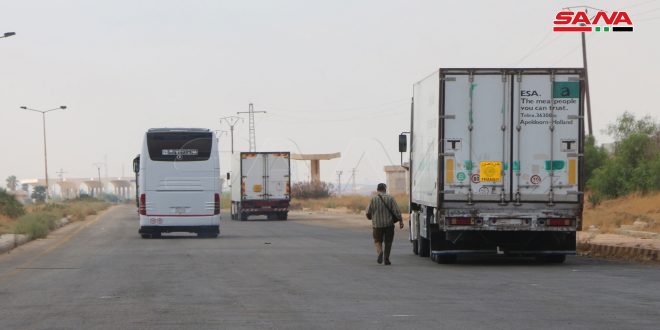 The director of the Jordanian Jaber Border Crossing between Jordan and Syria, Moayad al-Zou’bi announced on Wednesday the implementation of the decision to reopen and re-operate the Jaber-Nasib border crossing at full capacity.

In a radio statement, Zou’bi said that the movement of cargo and travelers at the Jaber-Nasib border crossing point started this morning accompanied by a set of procedures that facilitate the transport process.

“Transit trucks are allowed to enter Jordan and head towards Saudi Arabia and to leave Jordan towards Syria,” he said.

He added that travelers from Jordan can cross the border to Syria using public transport vehicles and buses without prior approval from the Ministry of Interior.

“100 cargo vehicles can cross the borders daily, while the number of passenger buses is not specified,” according to Zou’bi.

He pointed out that both arriving and departing passengers and drivers are required to submit a PCR test certificate valid for a period of 72 hours.

Last Monday, the Jordanian Ministry of Interior decided to reopen the Jaber-Nasib border crossing center as of Wednesday morning.

Road trips to start next week

In a relevant story, the Royal Jordanian Airlines will run road trips and not flights to Syria starting from next week, the Jordanian Transport Ministry clarified.

“Starting from next Sunday, the Royal Jordanian Airlines will provide land transport service to passengers from and to the Syrian Arab Republic as buses will head directly from Damascus city to Queen Alia International Airport until resuming flights in the future,” Media spokesman for the Jordanian Ministry of Transport, Ali Odaibat, was quoted by Ammon News Agency as saying.

Earlier, Jordanian Minister of Transport, Wajih Azaiza, said in a joint press statement issued by the Transport Ministry and the Civil Aviation Regulatory Authority that “Royal Jordanian Airlines will start its flights to the Syrian Arab Republic next Sunday, October 3rd, with the full compliance to all the conditions that are compatible with Health protocols.”