The Syrian defense minister met the Chief of Staff of the Jordanian Armed Forces in an official visit to Jordan, according to the Syria Times. 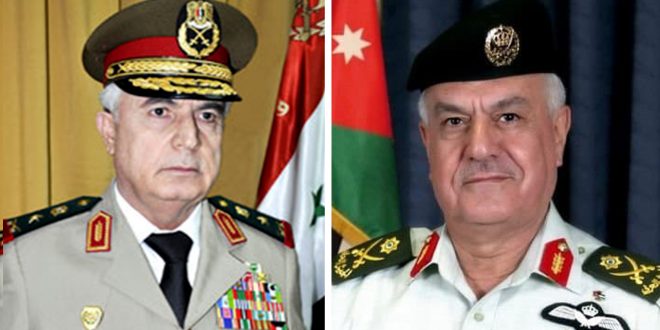 At the invitation of the Commander of the Joint Chiefs of Staff of the Jordanian Armed Forces, Major General Yousef al-Hunaiti, General Ali Abdullah Ayoub, Deputy Commander-in-Chief of the Army and Armed Forces, Deputy Prime Minister and Minister of Defense, paid an official visit to the Hashemite Kingdom of Jordan.

The two sides held an extensive meeting, during which they discussed cooperation between the armies of the two countries and prospects for their development, stressing the importance of coordination on common issues of concern to the two countries, especially in the field of combating terrorism and controlling borders. General Ayoub is accompanied by several senior officers of the General Command.