The recent extension of cross-border humanitarian aid to Syria has proved to be in favor of Russia and the regime, according to Syria TV. 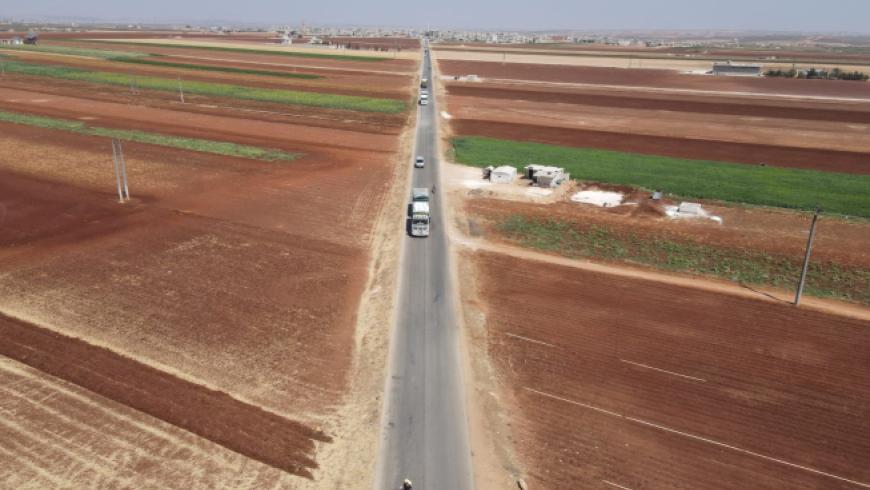 The decision to extend the entry of aid, which was celebrated by all the member states of the Security Council, began to be clearly revealed through the implementation process. On Monday, a small relief convoy came from Aleppo to Idleb supervised by the Syrian Regime’s Red Crescent. The convoy passed through an internal crossing on the contact lines between the towns of Miznaz and Maarat al-Na’san. The convoy of three trucks headed to unload its cargo at the Bab al-Hawa crossing, followed by the entry of a new convoy, on Tuesday, consisting of 12 trucks.

According to Syria TV’s confidential source, the trucks are loaded with food baskets, dedicated to 9,600 families. The Red Crescent will contribute to the distribution process along with organizations deployed in northwestern Syria.

This latest development indicates that the Security Council’s decision on extending the work of the Bab al-Hawa crossing is in favor of Russian standards. These standards highlight to the international community the legitimacy of the Syrian regime and push this international community to deal with the regime as an authority in Syria. The entry of the relief convoy to Idleb came one day after the visit of Martin Griffiths, under-secretary-general of the United Nations for the coordination of humanitarian affairs, to Damascus; Griffiths held an official meeting with the Foreign Minister of the Syrian regime Faisal al-Mekdad.

Dividing the entry of humanitarian aid into northwestern Syria at the Bab al-Hawa crossing, as well as the contact points with the Syrian regime forces, and allowing the regime’s institutions to participate in the aid’s distribution, means that the Security Council resolution granted the Syrian opposition only half a crossing. Western countries were demanding two crossings due to the significant amount of planned aid which could not only enter Syrian territories through the Bab al-Hawa crossing. This resolution also refers to al-Assad’s government’s international recognition regarding the humanitarian issue. This would also come after Assad’s government was accused of obstructing the access of aid to its beneficiaries, and the use of starvation as a tool for collective sanctions against opposition members.

There is a fear among humanitarian actors that, in the coming period, Russia will try to limit relief activity to international humanitarian institutions operating in northwestern Syria, while also reducing the role of organizations affiliated with the Syrian opposition. This is because the resolution to extend the entry of aid for a whole year is in fact divided into two periods, each period for six months. There is disagreement about the resolution’s interpretation, but Moscow is likely to demand amendments and not allow the second period of six months to take effect automatically.

Rather, during the coming period, it will try to emphasize the success of the Syrian regime in managing the humanitarian issue as means to justify canceling the second period for allowing entry through the border crossings. This would especially apply if Russia can force Iran out of the main airports in Syria, which it has been working on during the past period.

Since the start of Russian-Turkish negotiations on the Idleb region in 2019, Moscow has consistently pushed for the recognition of the role of the Syrian regime’s civil and security institutions in the Idleb governorate — a position that Ankara has consistently rejected. Nevertheless, instituting the Red Crescent’s operations entirely through the Syrian regime appears to be part of a gradual process for normalizing the work of the regime’s institutions in northwestern Syria.

“Humanitarian” assistance to the regime

Several weeks ago, Washington approved the passage of gas to Lebanon through Syrian territory, which served as an important indication that the political process involves expanding the Syrian regime’s role in humanitarian action. This development, in addition to negotiations with the World Bank on the rehabilitation of gas and electricity infrastructure in Syria and Lebanon, suggests growing U.S. leniency towards the “reconstruction” process, which has been hampered over the past few years.

Washington and the international community are likely to seek to strengthen coordination with Russia as a way to push the Syrian regime to respond more to the proposed political solution in Syria, while also reducing Iran’s influence. But these attempts have always lacked meaningful implementation mechanisms, and the Syrian regime and its backer Russia have consistently managed to use them to emphasize the inability of other countries to challenge their position.