An attack on an army vehicle around Daraa killed one regime soldier and injured eight others, as the situation in southern Syria deteriorates, according to SANA. 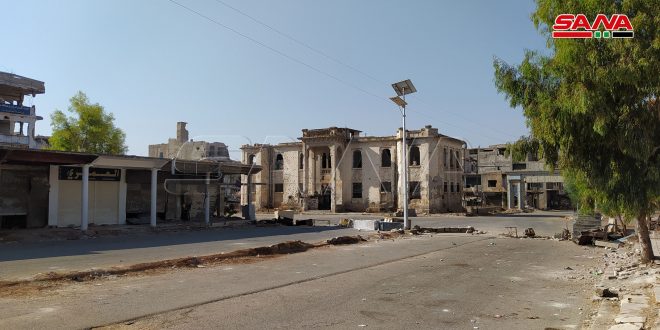 One soldier was killed and eight others were injured in a terrorist attack on a food transport vehicle for one of the Syrian Arab Army units on the road linking the cities of Nawa and Sheikh Miskeen in the Daraa countryside.

SANA’s reporter in Daraa said that “an explosive device planted by terrorists went off while a food transport vehicle for one of the army units was passing on the road between Nawa and Sheikh Miskeen. One soldier was killed and eight others were injured as a result of the Daraa attack, and the vehicle was damaged.”

Earlier, a terrorist group assassinated Judge Faisal Khalil al-Awad, by opening fire on him in Nawa City in the Daraa countryside.

“Terrorists on motorcycles targeted Judge Faisal al-Awad yesterday evening with several bullets while he was in front of his house in Nawa city in Daraa northwestern countryside,” a source at Daraa Police Command said in a statement to SANA reporter.

The source indicated that “Awad” was rushed to the hospital and he died of his wounds.

The remnants of terrorist groups in some areas in Daraa work on hindering all the settlement efforts exerted by the state to consolidate peace and stability across the province, as on Tuesday, they fired mortar shells on the al-Kashef town, the industrial zone, the Fire Brigade, and Gharaz area, causing material damages to the houses and the infrastructure.