King Abdullah II and President Putin discussed the situation in Southern Syria, primarily its humanitarian aspects, according to Asharq al-Awsat. 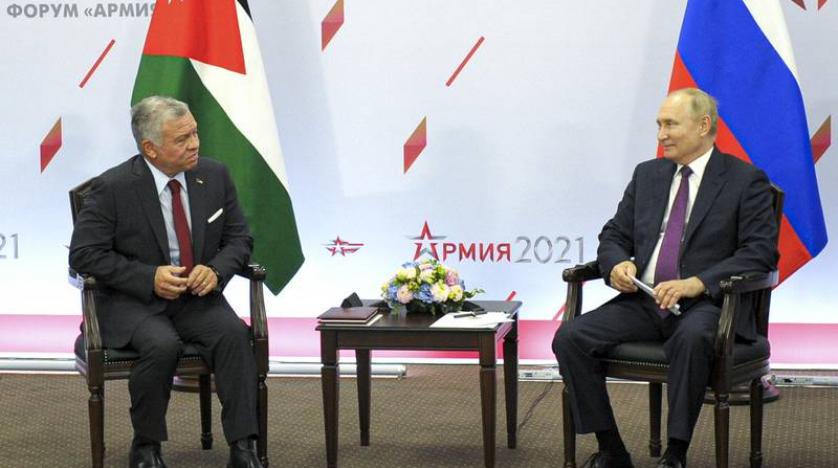 Russian President Vladimir Putin held talks with Jordan’s King Abdullah II, who is currently in Moscow upon a Russian invitation to attend the opening ceremony of the Army 2021 Forum – a huge exhibition of modern military technologies. Russian and Jordanian sources said on Monday that the visit was significant due to the deteriorating situation in southern Syria, prompting Amman to close its entire border crossing with its neighbor in late July.

Russian sources noted that Jordan was keen on a quick return to stability in the region and the resumption of the truce agreement in southern Syria that was reached in 2018 by Russia, Jordan, and the United States, and with the indirect participation of Israel.

Discussions also touched on the humanitarian situation in Syria, especially since the recent developments in Daraa impeded previous Jordanian efforts to allow the passage of goods across the borders between the two countries.

A Russian diplomat told Asharq al-Awsat that priority during the bilateral talks was given to the humanitarian crisis, especially with Jordan’s keenness to alleviate the suffering of Syrians, primarily in the south.

He added that the talks between the two leaders were “a continuation of the efforts made by the Jordanian leadership to help mitigate the repercussions of the humanitarian situation.”

King Abdullah had asked the U.S. administration, during his recent visit to Washington, to issue exceptions to the restrictions imposed by the Caesar Act for humanitarian purposes.

The Russian diplomat said that Moscow and Amman agreed on this issue.