Ali Asghar Khaji reiterated to Pedersen his country's rejection of the unilateral coercive measures imposed by the U.S. administration on Syria, according to the Syria Times. 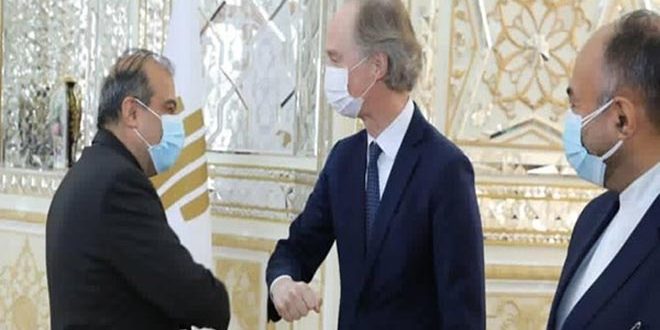 The Minister Senior Assistant in Special Political Affairs of Iran, Ali Asghar Khaji reiterated his country’s rejection of the unilateral coercive measures imposed by the U.S. administration and Western countries on the Syrian people.

Khaji called, during a phone call on Tuesday with the envoy of the Secretary-General of the United Nations to Syria, Geir Pedersen, to increase and speed up the transfer of international humanitarian aid to Syria. He pointed out that, the difficult living conditions of the Syrian people are a result of the unjust Western measures imposed on them in conjunction with the spread of the Corona epidemic.

Pedersen expressed his appreciation for Iran’s role and its supportive stance to resolve the crisis in Syria politically. He called for continuing and enhancing cooperation in this regard.

The two sides also discussed the importance of holding a new round of meetings of the Committee of Discussing the Constitution in Geneva soon.