Speaker of Parliament Hammouda Sabbagh congratulated the new Iranian president Ibrahim Raissi on his assumption of power, according to the Syria Times. 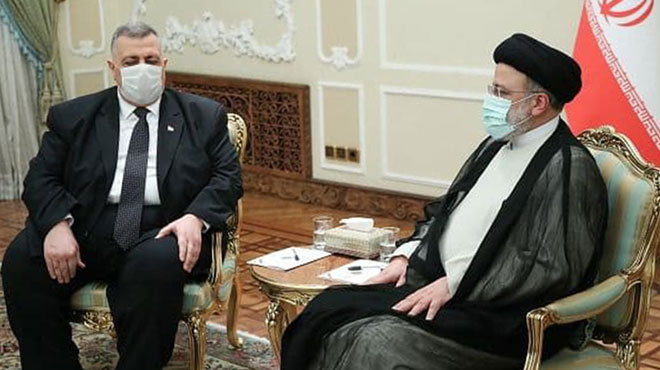 Wednesday, Parliament Speaker Hammouda Sabbagh congratulated on behalf of the Syrian people and their leadership the Iranian President Ibrahim Raisi on the occasion of his assumption of power.

Iranian President conveyed his greetings to President Bashar al-Assad and the Syrian people, hoping for  Syria and its people to enjoy security and stability.

He referred to the development of political and economic relations between Tehran and Damascus to serve the interests of the two countries.

Raisi praised the steadfastness of the Syrian people, their leadership and their courageous resistance to Western terrorism, and their victory in the face of terrorism thanks to the sacrifices of martyrs, including the martyr Lieutenant-General Qassem Soleimani, commander of the al- Quds Force, in the Iranian Revolutionary Guard.

Raisi underlined the importance of the retreat of the illegal foreign forces from Syrian territories as soon as possible so that the Syrian people can begin the reconstruction process.

For his part, Sabbagh stressed that the Syrian-Iranian relations are strong and deeply rooted and cannot be undermined, pointing out that the participation of Syria and Iran in the joint battle against terrorism constituted the most important factor in achieving victory over terrorism.

Sabbagh highlighted the need to strengthen bilateral relations in various fields, especially economic ones, reiterating that the Syrian people will never forget the Iranian people’s support for Syria in fighting terrorism and in various political and economic fields.