Hammoda Sabbagh, the Speaker of the Syrian Parliament, is on an official visit to Iran to represent President Bashar al-Assad in the oath ceremony of Raisi, the Syria Times writes. 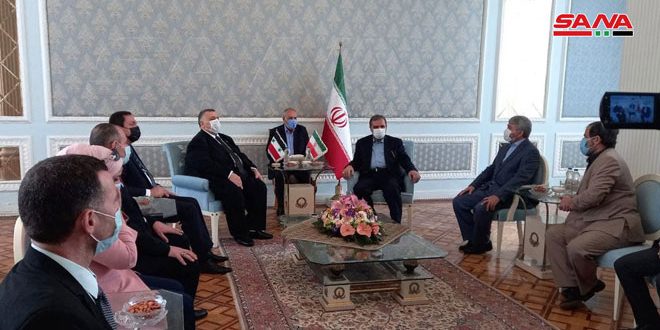 The Speaker of the People’s Assembly [Parliament], Hammoda Sabbagh, headed a parliamentary delegation that arrived in Tehran on Tuesday to take part in the oath ceremony of Iranian President-elect Ebrahim Raisi, and extend congratulations in the name of President Bashar al-Assad, and on behalf of the Syrian people, government, and parliament.

Sabbagh has underscored the need to cement the strategic relations between Syria and Iran in all fields, especially in the fields of economy and trade. Sabbagh’s remarks were made during his meeting on Wednesday with Mohsen Rezaee, Secretary of the Expediency Discernment in Iran.

He pointed out that Syria and Iran achieved victories over terrorism. “We face the same enemy and the same destiny, so unifying the joint efforts and reactivating cooperation between Syria and Iran will serve the interests of the two nations,” Sabbagh asserted.

He affirmed that the U.S. and the west adopted a double-standard policy towards the causes of our region to serve the interest of the Zionist entity.

For his part, Rezaee said that the world owes to Iran and Syria their effort in the fight against terrorism and takfiri groups, praising the victories achieved by the Syrian people, army, and leadership over terrorism.

He asserted his country’s keenness on enhancing relations with Syria in all fields.

“Our relations with Syria are deep-rooted and no one can encroach on them… The two countries’ will is strong, and we will be together in all fields,” Rezaee concluded.

President Raisi, 60- years old, will take the oath on Thursday before the Iranian Shura Council in the presence of Sabbagh representing president Bashar al-Assad.