During a meeting with UN figures, Faisal al-Mekdad reaffirmed Syria's claim on the occupied Golan Heights, according to SANA. 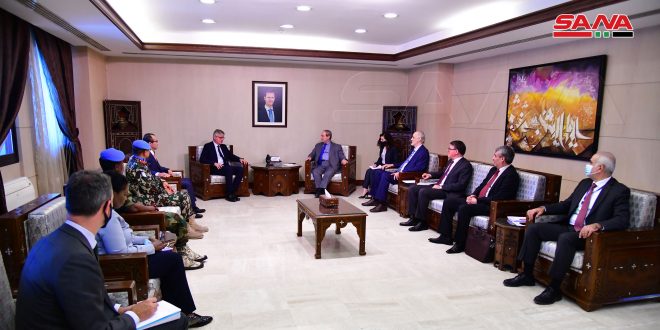 Mekdad said, during his meeting on Tuesday with Under-Secretary-General for Peacekeeping Operations (DPKO) Jean-Pierre Lacroix, and Assistant Secretary-General for the Middle East, Asia, and the Pacific Mohamed Khaled Khiari, that the presence of the peacekeeping forces doesn’t remove the need to find a final solution to the problem of the occupation, stressing Syria’s firm right in restoring the occupied Syrian Golan to the motherland.

The minister pointed out the Syrian government’s firm stance about providing support for the work of the UNDOF to fully implement the mandate entrusted to it, particularly monitoring the disengagement, as well as uncovering the Israeli violations of the Agreement on Disengagement, represented by its repeated attacks on Syrian sovereignty.

He renewed his condemnation of the recent statements by the US administration, which ignore UN resolutions that recognize the Golan as an occupied Syrian Arab land.

For his part, Lacroix welcomed the assistance and support provided by the Syrian state to the peacekeeping forces, stressing the importance of maintaining a good relationship with the government of the hosting country.

In turn, Khiari hailed the peacekeeping forces’ role in creating an environment of stability and tranquility in parallel with the work to find a just solution to the conflict.