Residents of Sheikh Saad have queued for hours to try and secure heating fuel, although there was not enough to go around reports Al-Watan. 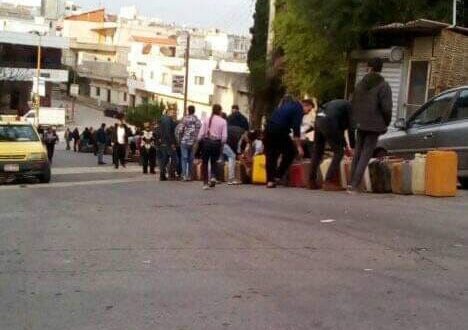 Over the course of eight hours, a long line formed today in the town of Sheikh Saad, which is adjacent to the city of Tartous, as citizens tried to obtain the 50 liters of diesel oil allowed for each family. People stood for several hours on the main road in the bitter cold, until some of them managed to acquire the diesel and take it home using their own cars or rental cars, while some left on foot or with the help of their children.

Al-Watan received several calls from citizens complaining about the wait, the lack of diesel, and their inability to transport it back to their homes, noting that tender vehicles blocked the lanes along the town’s square. They demanded that the town be supplied with large quantities of diesel on a daily basis, so that the townspeople, who collectively have about 10,000 e-cards can obtain the quantity of diesel allocated to them over the next few days, knowing they have been deprived of it since the beginning of the winter season.

The head of the town council, Mohammad Suleiman, told Al-Watan that the residents need about half a million liters, as there are about 10,000 active e-cards. On Wednesday, the fuel branch’s diesel tanker truck came into town for the first time, after it had been distributing diesel to the families of the martyrs and the wounded, but carrying only 10,000 liters. As soon as people heard of its arrival, they flocked to the municipality building with gallon containers, in the hope of getting their 50 liters of diesel allocation. About 200 people managed to get diesel, while the rest will be receiving their allocation in a phased distribution.

Suleiman hoped that the fuel branch would continue to send diesel on a daily basis, and in greater quantities, until it is distributed to all families. He also said that citizens should stay in their respective neighborhoods and wait for the tanker truck to arrive instead of heading to wherever the tanker is, which causes congestion, longer waits, and chaos.