With the town of Tafas surrounded by Assad’s forces,  Ahmad al-Oda has said that he will not negotiate with the fighters to ensure that they are not displaced or arrested reports Alsouria Net. 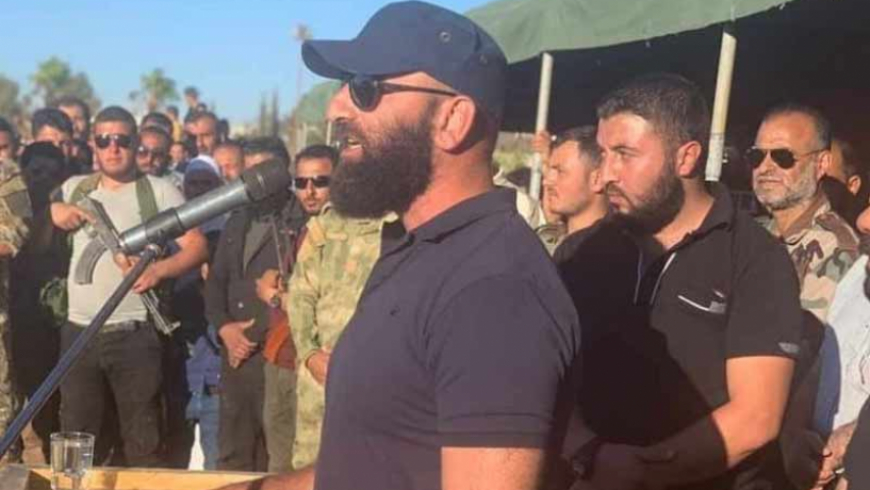 Ahmad al-Oda, commander of the 8th Brigade in the Russian-backed Fifth Corps in Daraa Governorate, refused to intervene as a mediator to solve the issue of the town of Tafas in the western countryside of Daraa.

A source familiar with the matter said that the Central Committee responsible for the western regions of Daraa asked Oda to play the role of mediator with the other party, Assad’s forces and Russia, but he declined the request.

The source added that, “the mediation request made by the members of the Central Committee relates to the intervention of Oda in order to integrate the wanted fighters into his forces so they are not displaced or have to surrender themselves. Oda was asked to persuade the officers in the Assad forces to reverse Monday’s decision and to solve the Tafas issue.”

On Monday, during a meeting in Daraa, the Assad regime required the notables of Tafas and members of the Central Committee in the western countryside of Daraa to implement three things to stop the security campaign, which the regime started on Sunday.

The conditions are to displace or hand over a number of persons and their families; allow searches for Islamic State (ISIS) and extremists cells, as described by regime officers; and completely evacuate the headquarters of the Syrian state in Tafas and hand them over to the regime. The deadline that the Assad regime set is next Thursday.

The source pointed out that the Daraa Central Committee has not yet taken any decision regarding the conditions imposed by the regime, pointing to the difficulties that come with possibly displacing any of the wanted persons to northern Syria.

Local networks reported that the Fourth Division forces are still bringing reinforcements to the western countryside of Daraa, especially in the vicinity of Tafas.

On Sunday, Tafas, in the western countryside of Daraa, witnessed sporadic clashes and tank shelling by Assad’s forces, which tried to storm several areas under the pretext of searching for wanted persons and heavy weapons.

Assad’s forces were targeted by gunmen, which led to the death of a number of members. Local networks said the number exceeded three.

Oda is considered one of the most prominent former leaders of the Free Army in southern Syria. He entered into a settlement agreement in 2018, which allowed him to stay in his city of Busra al-Sham.

The events taking place in Tafas resemble those that the eastern town of al-Karak experienced at the end of last year, at which time Oda was unable to intervene to resolve the security tension that was brought about by the siege imposed by Assad’s forces.