Displacement camps in Idleb have been battered by rains, which have destroyed shelters and forced families into the open air reports Alsouria Net. 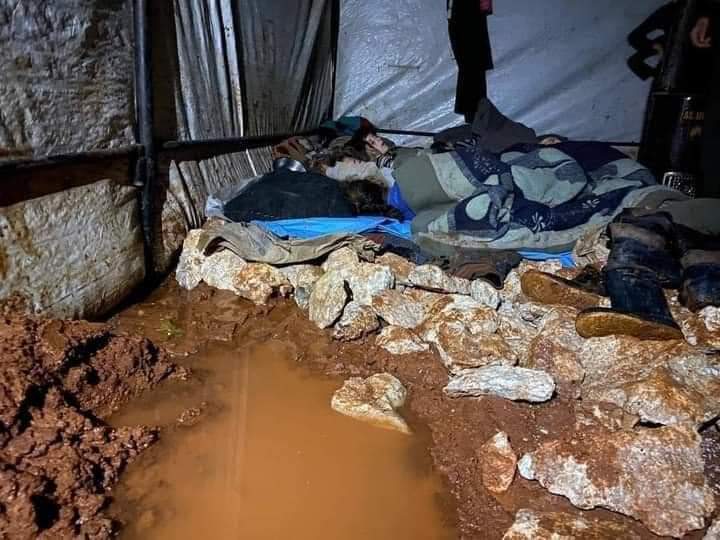 The number of camps affected by the heavy rain in Idleb Governorate has increased to 145. Moreover, according to what the humanitarian teams announced, many roads leading to the camps in the northern countryside were cut off over the past day.

The Response Coordinators team in northern Syria said on Monday that the number of tents that have been totally damaged reached 278, while 513 were partially damaged, in addition to extensive damage to roads, exceeding eight kilometers within the camps and their surroundings.

The humanitarian team added that the documented damage is only a “preliminary outcome,” as the teams are currently trying to assess the situation in the affected camps, which have been difficult to reach due to blocked roads.

The Response Coordinators team said that “thousands of civilians spent the night standing or outdoors because rainwater had entered their tents.”

The team explained that hundreds of families were rendered homeless, while some were displaced. A small number moved into places of worship and shelters.

The damages hit the following camps in the past hours: the Khirbat al-Jawz camps in western Idleb, all the way up to the border camps towards the northern countryside of Aleppo, in addition to the vicinity of Idleb, Maarrat Misrin, Killi, Harbanoush, Kafr Yahmoul, Hazano, and Zardana.

The Coordinators team expected further damage in the event of more rain or a renewed incident in the region.

Shaam Network published a video recording of Syrian Salvation Government Prime Minister, Ali Keda, who appeared with bodyguards, including a person carrying an umbrella, during his visit to one of the flooded camps in the Idleb countryside, an incident local activists decried.

While addressing the residents of the flooded camps, Keda said that he has a place that can accommodate about 200 tents if the residents accept relocation, which he said would be rent-free. The video recorded the response of the residents, who rejected Keda’s proposition; a solution they considered expendable, as it is simply moving them from one tent to another.

According to activists, the visits of Keda and a number of other figures affiliated with the Salvation Government, including Minister of Interior Ahmed Latouf, increased distrust, because of their attempts to exploit the suffering of the displaced in northwestern Syria.