A bus carrying regime soldiers went missing on its way to Homs city, only to be later found, empty and on fire reports Baladi News. 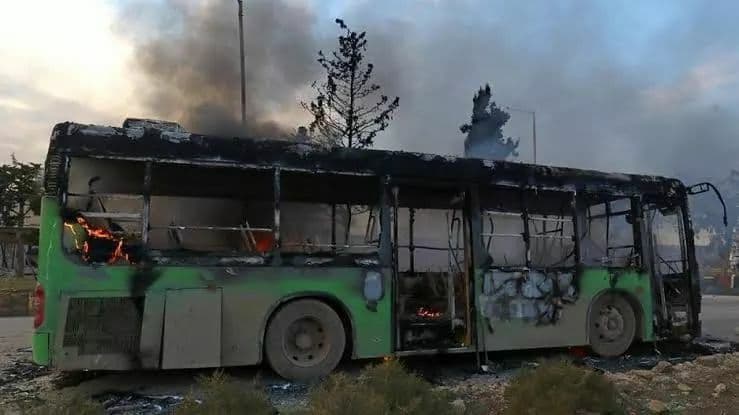 On Saturday, the Syrian regime forces lost contact with a bus carrying its members on the Ithria road in the eastern Hama countryside, as it was returning from Raqqa, on its way to Homs.

According to pro-regime media sources, most notably Tartous Now, the regime forces lost contact with a bus that was transporting nine members and three officers, traveling on the Ithria road, that was on its way back from the Raqqa area to the city of Homs.

Tartous Now added that after a lengthy search, the regime forces were able to locate the bus, which had caught fire on the Ithria road. The fate of the passengers remains unknown until this moment.

The Sham Media Center, which specializes in reporting news on the Syrian desert and northern Syria, stated that clashes are continuing in separate areas in the Syrian Badia, between the regime forces and the Islamic State (ISIS).

The center confirmed that during the past few hours, the clashes resulted in the killing and wounding of three individuals in the eastern countryside of Aleppo and the killing of several members of the Quds Brigade militia near Jabal al-Bishri, when a vehicle carrying them was ambushed. An officer with the rank of first lieutenant from the 25th Division was killed on the Salamiyah-Ithria road when a bomb targeted his car.

During the past few weeks, the Syrian desert has witnessed clashes between ISIS cells and members of the regime forces, as ISIS elements carried out successive attacks on regime sites and the local militias loyal to it.

Moreover, the Rusafa-Ithria road south of al-Tabqah city has been witnessing intermittent clashes between the regime forces and the militias supporting it, on one side, and ISIS cells, on the other.