Syria has condemned the recent attacks that occurred on the al-Salamiyah-Athria road and in the Kabajib area writes SANA. 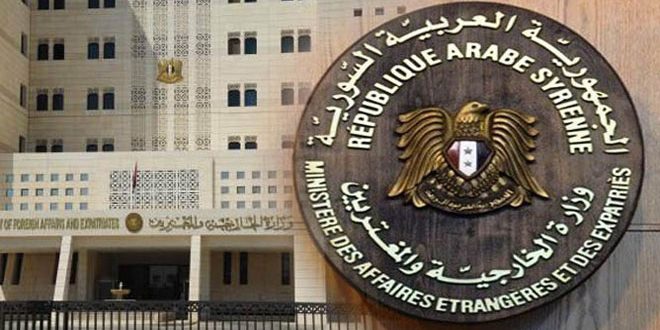 Syria condemned, in the strongest terms, the terrorist attacks that targeted a bus in the Kabajib area and fuel tankers and civilian cars on al-Salamiyah-Athria road, which claimed the lives of a number of civilians and soldiers and wounded many others.

“The Syrian Arab Republic condemns in the strongest terms the cowardly terrorist attacks that targeted a bus in the Kabajib area on the road between Palmyra and Deir ez-Zor, as well as fuel tankers and civilian cars on the al-Salamiyah-Athria road, which claimed the lives of a number of civilian and military martyrs and wounded many others,” ِan official source at the Foreign and Expatriates Ministry said in a statement to SANA on Monday.

The source added that those heinous terrorist attacks, which coincide with the repeated Israeli attacks on the Syrian lands, show once again the organic connection between the terrorist groups and the occupation entity as well as the sponsors of terrorism: the US, the West and the Turkish regime; which aim to prolong the crisis in Syria and impede the return of security and stability and increase the suffering of the Syrian people with terrorism and unilateral, illegal coercive measures.

The source went on to say that the Syrian people and their brave army, who wrote epics of steadfastness in battles of honor against terrorism and its supporters, are stronger and more determined to confront the war on Syria in all its different forms.