Protests have erupted after the SDF tried to get teachers to complete compulsory service on the frontlines reports Enab Baladi. 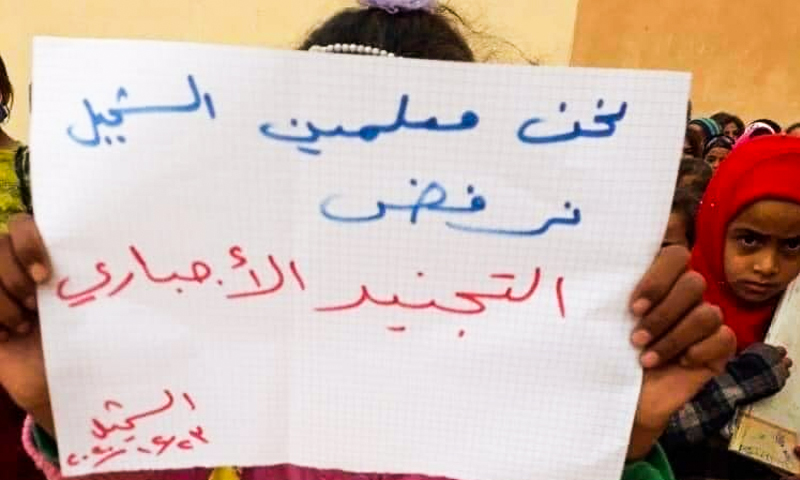 Demonstrations took place in the city of al-Shuhail in the eastern countryside of Deir ez-Zor, in response to the decisions of the Autonomous Administration in northeastern Syria, which subject teachers to compulsory service in the ranks of the Syrian Democratic Forces (SDF).

On Wednesday, local networks published pictures of students holding signs that read, “The teacher’s weapon is the pen! No to compulsory service!,” and “We want teachers in schools, we do not want them on the fronts,” and “Do not steal our teachers from us!”

In the past few days, teachers and students in the villages, towns, and cities of al-Busira, al-Hawaij, al-Ragheeb, Sweidan, and al-Jeradi in the countryside of Deir ez-Zor organized protests to reject the decision.

The SDF issued lists including the names of 106 teachers and employees in the health and municipalities sectors in the eastern countryside of Deir ez-Zor, saying it’s necessary for them to join its ranks.

On Jul. 13, 2014, a law of “self-defense” was announced in the Syrian Jazira Region in northeastern Syria. Under that law, young men of service age were taken into compulsory conscription in the ranks of the SDF, which, with its civil representative, the Autonomous Administration, imposed its authority over most of Hassakeh Governorate, large parts of Deir ez-Zor and Raqqa governorates, and the city of Manbij in the eastern countryside of Aleppo.

Despite the slight amendments that have been introduced over the years, the conscription law ended up taking its final form on Jun. 23, 2019, when the Autonomous Administration approved a new law consisting of 35 articles, making it a law similar to the compulsory service law of the Syrian regime.

The announcement of the recruitment law, which was approved under the guise of self-defense, was preceded by the arrest of young men between the ages of 18 and 30 in both Hassakeh and Qamishli by the Asayish forces, the security arm of the Kurdish People’s Protection Units, which constitutes, in turn, the military wing of the SDF.

The areas under SDF control witnessed several demonstrations in response to their practices and due to the deteriorating security and living conditions.