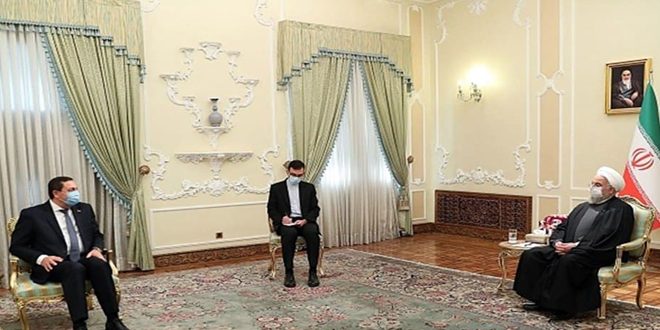 Iranian President Hassan Rouhani on Tuesday reiterated that Iran will stand by the Syrian people and government until the final victory over terrorism, the return of refugees and the reconstruction of Syria are achieved.

Rouhani, during his meeting with the Syrian ambassador in Tehran Dr. Shafiq Dayoub who was receiving his credentials, described the Syrian-Iranian relations as strategic, friendly and fraternal throughout history.

“In recent years, the Islamic Republic of Iran has always supported the Syrian people in defending the truth and fighting terrorism until the final victory is achieved and the return of refugees and the reconstruction in Syria”.

Rouhani stressed that Iran will continue its diplomatic efforts, especially in the framework of the Astana talks, to help fully establish stability, peace and tranquility in Syria.