Speaking at a video conference, the BRICS nations have said that the crisis in Syria can’t be solved through military means writes SANA. 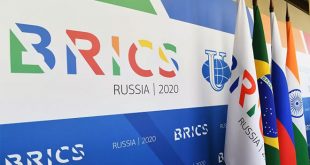 BRICS nations groups reaffirmed on Tuesday their commitment to the sovereignty, independence and territorial integrity of Syria.

The final statement of the 12th summit of BRICS states, held via video conference and posted on the Kremlin website said, “We declare once again our firm commitment to Syria’s sovereignty, independence, unity and territorial integrity,” pointing out that the crisis in Syria can’t be solved through military means.

According to Sputnik Agency, the BRICS nations also reiterated their international obligations to combat terrorism in all its forms, stressing the importance of unity in combating terrorist organizations operating in Syria.

On the Palestinian issue, the BRICS nations called for exerting new efforts  for a just and comprehensive settlement for the Israeli-Palestinian conflict.