Recordings taken at the recent refugees conference, have revealed that journalists covering the event do not agree with or believe the sentiments express by the conference's speakers writes Al-Modon. 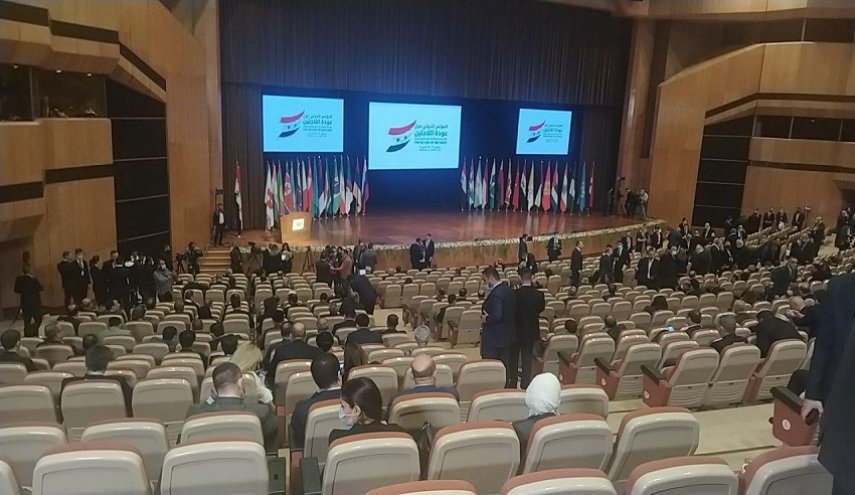 Syrian activists circulated a leaked audio recording featuring a number of journalists, translators, and live broadcasters, on the sidelines of the refugee conference held by the Syrian regime under Russian auspices in Damascus, on Wednesday and Thursday of last week.

The recording, taken from a live broadcast by the Russia Today channel via YouTube, has the voices of unidentified individuals, who appear to be translators and journalists present at the conference, speaking together during one of the breaks, unaware that the audio equipment was live.

One of the people ridiculed the idea of ​​the conference entirely, saying, “What conference? People already in the country would leave the first chance they get!”

Staff members also exchanged sarcastic comments about the usefulness of the conference and the main headlines that were discussed. One of the journalists supported, off camera, her colleague’s opinion, who confirmed the desire of the Syrians at home to get out of Syria, contrary to what the conference aims at promoting with regards to the return of those abroad. The journalist said, “You are right! You cannot blame anyone who wishes to travel”, referring to the difficult economic conditions in the country.

The people in the video mocked the ineffective attendance at the conference, and compared it to the Sochi conference, when the Syrian regime took about 5,000 people to Russia in order to applaud the regime and echo their loyalty.

While opposition activists said that the Russian media deliberately leaked this “scandal” in order to embarrass the regime, as a continuation of media skirmishes that have been taking place this year between the two sides, the clip is not a leak in the literal sense of the term. It is rather a snippet from a long live broadcast.

Others commented that the scene shows to everyone the stark truth about the return of the refugees under the current circumstances.