Syrian Foreign Minister and Deputy Prime Minister Walid al-Muallem has died at the age of 79, after years of service and support for the Assad regime. 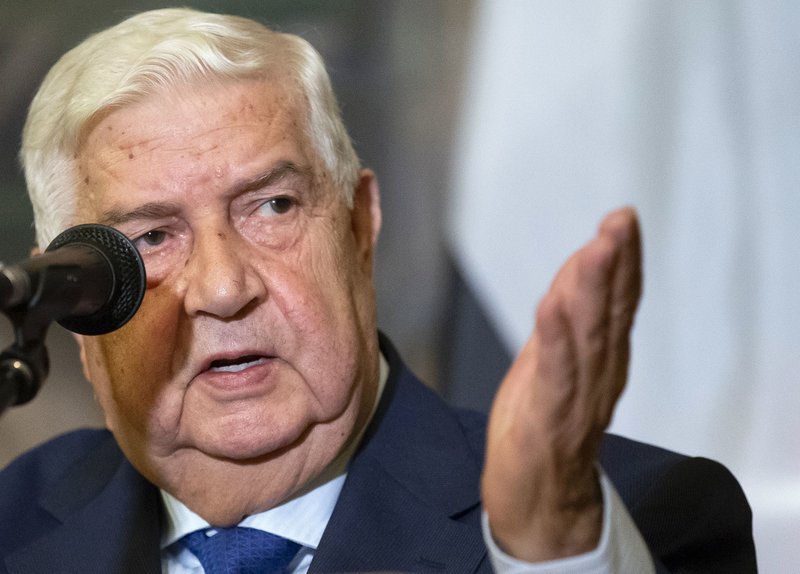 There were no details on the cause of death, but the 79-year old had for years been in poor health with heart problems.

A source close to the Syrian government said it was widely expected his deputy, veteran diplomat Faisal Mikdad, would replace him as Foreign Minister.

But other names that have come up include Assad’s adviser Bouthaina Shabaan, Syria’s UN Ambassador Bashar al-Jaafari, and Assistant Foreign and Expatriates Minister, Ayman Sousan.

Muallem was buried Monday in Damascus in an official and popular presence, SANA reported.

The Lebanese Minister of Social Affairs and Tourism, Ramzi Musharafieh, participated in the funeral, representing General Michel Aoun, President of the Lebanese Republic.

Muallem was born in Damascus in 1941 and studied in its public schools from 1948 to 1960, and then studied at the University of Cairo and graduated in 1963 with a BA in Economics.

The Russian Diplomat pointed out that Muallem contributed to developing the traditional friendly relations between Russia and Syria, which, in recent years, upgraded to the level of strategic partnership.

Iranian Foreign Minister Mohammad Javad Zarif expressed his condolences over demise of Muallem. In a condolences message he sent to Prime Minister Hussein Arnous on Monday, Zarif said that, “during his lifetime, Muallem played an important role in serving and defending the national interests and security of his country.”

President Mahmoud Abbas, condoled Assad on the death of the Muallem. Accordig to the WAFA news agency Abbas’s message read, “In the name of the State of Palestine and its people and on my own behalf, we present to your Excellency, and through you, the family of the deceased, the government and the brotherly people of Syria, with the highest expressions of heartfelt condolences and fraternal sympathy, asking God Almighty to bless the deceased with the depth of his mercy and his spaciousness in his dwellings, and to protect you and the Syrian Arab Republic and its brotherly people with all goodness and peace.”

The diplomatic advisor to the King of Bahrain, former Foreign Minister Khalid bin Ahmed al-Khalifa, expressed his condolences for the death of the Muallem. Khalifa wrote in a tweet, “May God have mercy on Muallem, a loyal brother and an able diplomat in difficult times. We belong to God and to Him we shall return.”

President of Venezuelan Nicolas Maduro expressed his condolences for the passing Muallem, on Twitter. He wrote, “Muallem was a brother and a close friend whom I met during the diplomatic work, I extend my sincerest condolences to his family and to all the Syrian people.”

Mikdad described the death of Muallem, as a “sad day”, as, “Syria today lost a patriotic fighter who worked with words and persuasion, and fought unimaginable battles over recent years.”

Mikdad said in a statement to Al-Mayadeen TV, “I knew him a long time ago when he was an ambassador in Washington and I was an ambassador in New York. He spared no effort in serving his country, in the struggle against terrorism, exposing the goals of the nation’s enemies and the struggle to restore the legitimate rights of our Palestinian and Syrian people. In the occupied Golan, to defend the just causes of the homeland.”

Ayman Sousan, one of the possible successors, said on Monday that Muallem was confident and certain of the inevitability of victory in the terrorist war which has been imposed on Syria, indicating that Muallem, till the last moment of his life and despite the severity of his disease, was carrying the national concern and continuing his task.

Information Minister Imad Sarah affirmed that with the passing of Muallem, Syria lost a prominent national figure who bears it in his conscience, mind and heart and who remained a loyal soldier, fighting diplomatically for it till the last breath.