Russian diplomats have praised the efforts of the recent conference on refugees in Damascus and lamented the attitude of other nations that did not attend writes SANA. 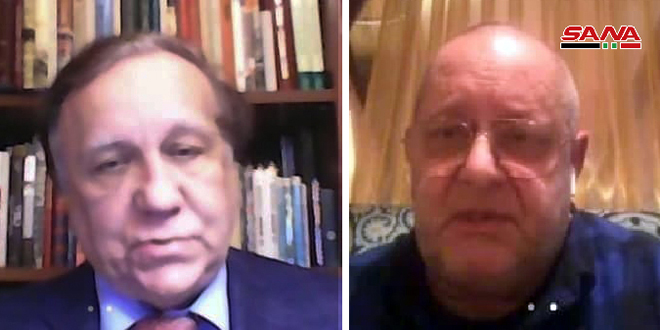 Deputy Chairman of the Board of the Association of Russian Diplomats Andrei Baklanov, said that the International Conference on the Return of Syrian Refugees, held in Damascus on Nov.11-12, 2020, gave an opportunity to those who are really interested in the plight of refugees to meet and express their willingness to work in order to present real help to guarantee their return to their homeland.

In an interview via video with SANA’s correspondent, Baklanov criticized the boycott of the conference by Western governments, who claimed to be concerned with the fate of refugees.

“Their refusal to attend the conference shows their disinterest in this issue,” he said, adding that their main aim is to continue their hostile acts against Syria.

Other diplomats and experts said that practices of western countries and their conspiring against Syria facilitated the entrance of international terrorist gangs, adding that later, US and western unilateral coercive measures came to increase the suffering of the Syrian people.

They stressed that the rejection of the Western countries to attend the international conference on the return of Syrian refugees had exposed the positions of the West and its aggressive policy adopted against the Arab region, especially Syria, Iraq and Libya.

They added that the unilateral coercive measures, imposed by the West on Syria, had mainly hurt the civilians and children since they prohibited any external commercial exchange and restricted the access of assistance to Syria.

The diplomats pointed out that the holding Damascus Conference was necessary to encourage the refugees to return to their homeland, calling on the international community to provide assistance to Syria to achieve this purpose.