The regime’s forces have surrounded the town of al-Karak al-Sharqi and are threatening to storm the area and shoot anyone present, if seized weapons are not returned reports Nedaa Syria. 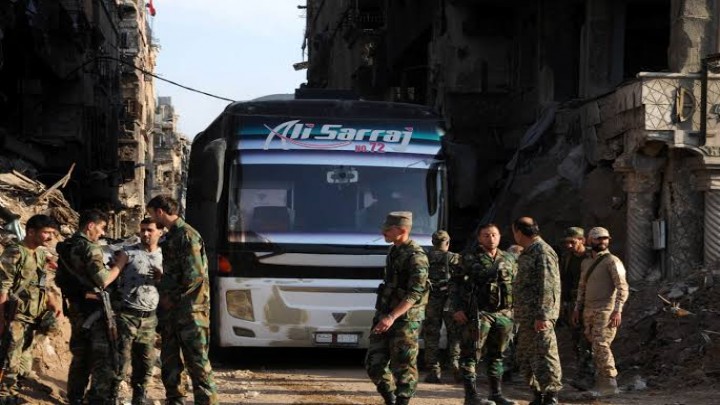 The Syrian regime forces cordoned off the town of al-Karak al-Sharqi in the eastern countryside of Daraa, in conjunction with the start of negotiations with the townspeople to return weapons they had seized from Air Force Intelligence personnel, on Monday.

An exclusive source told Nedaa Syria that the Assad regime’s intelligence services are threatening to storm the town after the Syrian regime’s army and militias encircled it, and shoot anyone in its vicinity, and prevent entry and exit from it, amid its insistence on recovering the weapons that were taken yesterday.

The Syrian regime forces have deployed tanks, vehicles, and dozens of soldiers on the eastern outskirts of al-Karak, and reinforced their forces at the western checkpoint with heavy machine guns. They also put up a new checkpoint north of the town on the same side of the 52nd Brigade.

Negotiations are underway in Daraa al-Mahatta in the city of Daraa to hand over weapons in exchange for the forces not storming the town and lifting the siege.

On Monday, a group of townspeople killed five members, including a lieutenant-colonel, the families of two officers, and twenty members of the Syrian regime’s Air Force Intelligence, after they launched an attack on one of the checkpoints in Daraa al-Balad.

The governorate is experiencing a general atmosphere of tension following the attempts of the Syrian regime and Iranian militias to control Daraa al-Balad, where former Free Syrian Army fighters who refused to sign the settlements are still stationed.

On Monday, the Fourth Division militias withdrew from the orchards of the al-Nakhla area, which it stormed, after former Free Syrian Army fighters resisted and responded to the attack.