President Assad has said that the refugee conference, which starts today, is a chance to solve a pressing issues and thanked Iran for its support and help writes Al-Watan. 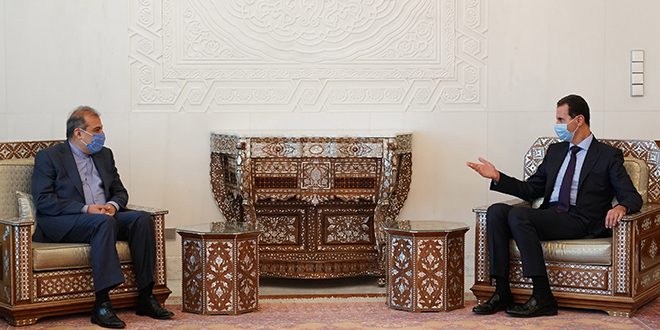 On Tuesday, President Bashar al-Assad stressed that the International Conference on Refugees’ Return, scheduled to be held in Damascus over the next couple of days, will be an essential step towards resolving the issue, especially as it will enable an exchange of views with a number of regional and international actors.

Assad received, on Tuesday, Ali–Asghar Khaji, the Iranian Foreign Minister’s Special Assistant for Political Affairs and his delegation. The meeting centered around the conference, according to what the presidency of the republic said on their Telegram channel.

Assad stressed that the refugee issue is a Syrian issue, whose solution does not depend solely on the Syrian government, but rather on some countries, that claim to defend human rights, showing integrity. These countries, according to Assad, do not empathize with the hardships that refugees have lived throughout the years. Rather, they strive to politicize the issue and keep the refugees outside Syria for as long as possible in order to put pressure on the country.

The Iranian delegation informed Assad of Iran’s vision for this conference and its readiness to provide any support that could contribute to the success of the conference and the resolution of this humanitarian issue, all the while stressing that the security situation in Syria has improved significantly, through the relentless efforts made by the Syrian government to rebuild everything terrorism has destroyed. This constitutes an important step towards ensuring the return of all Syrian refugees and putting an end to the suffering that most of them struggle with in their respective countries of asylum.

Views were exchanged during the meeting on a number of political issues, including the Astana talks on Syria and the Syrian Constitutional Committee.

Yesterday, Assad confirmed, during a video conference with Russian President Vladimir Putin, that the refugee issue in Syria is a national issue and the number one priority for the government during the upcoming stage, stressing that the Western blockade, led by the US, is a major obstacle to the return of refugees.