Turkish forces are withdrawing from positions in Idleb that are within areas controlled by the Syrian regime writes Nadaa Syria. 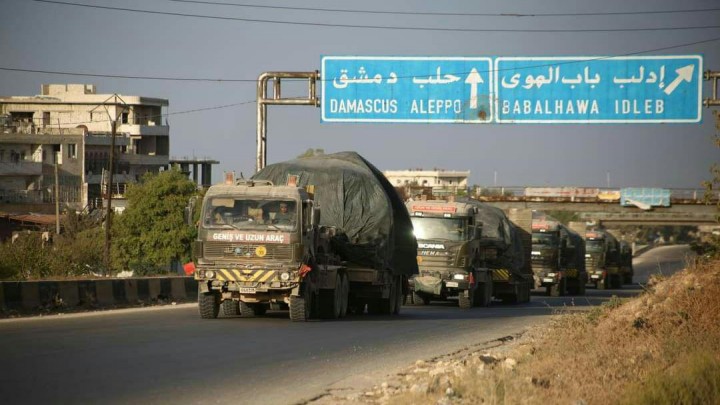 The Turkish military vehicles withdrawing from the Morek base in the northern Hama countryside began to enter the areas under the control of the opposition factions in the Idleb countryside this afternoon.

Nadaa Syria’s correspondent stated that the Turkish vehicles headed towards the village of Qafin in the Jabal Zawiya area in the southern countryside of Idleb, where they will stay.

Exclusive sources confirmed to Nadaa Syria that the Turkish army will be located within the regime-controlled areas, in four outposts — Morek, Sher Maghar, Sorman, and Maar Hatat.

The sources stated that three of the aforementioned points will be concentrated in each of Kansafra and Qafin in the southern countryside of Idleb, and the village of al-Enkawi in the al-Ghab Plain, in the western countryside of Hama. The fourth outpost has not been decided upon yet, because the Turkish army is still conducting reconnaissance operations to choose the best spot.

The sources indicated that Turkey has set a timetable for its withdrawal, which ends in late December.

It was reported that the Turkish preparations to evacuate the Morek base began a few days ago. No official explanation has been provided by the Turkish Ministry of Defense. The Russian side has not commented, either.