President Assad has toured the area affected by the recent wildfires and promised the residents that the state will provide services and help, so that their lives and land can be restored reports SANA. 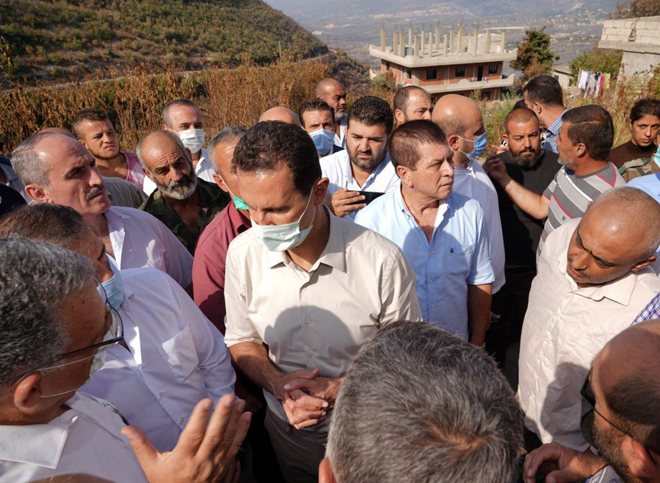 On Tuesday, President Bashar al-Assad toured a number of areas affected by the fires that spread a few days ago in Lattakia.

For his first stop the tour, Assad visited the Ballouran area in Lattakia’s northern countryside, where he inspected the damage caused by the fires and met the locals.

Assad listened to the demands of the locals of Ballouran village, so that they could be helped to secure their basic needs, which will help their lands and have them re-cultivated as soon as possible.

Ministers of Local Administration and Agriculture and Agrarian Reforms and the Governor of Lattakia accompanied Assad on his tour.

In Qardaha countryside, Assad visited Bsout village whose locals were forced to leave their homes during the fires, and returned once they were extinguished, in cooperation with the civil defense, the Syrian Arab Army and the locals of the village and its surroundings.

The locals of the village expressed their appreciation for the efforts exerted by the state institutions and the locals of the area, which have contributed to securing their village and extinguishing the fires before it was devoured, along with the surrounding areas, asserting that their immediate return to their houses reflects their adherence to their village and lands, despite of all the difficulties they have been facing.

In a statement to the national media during his visit to Bsout village, Assad said that the damage and challenges are considerable, adding that, “the most important thing which we know is that overcoming these challenges is not impossible at all, as all problems which we have heard about before our visit or which we have monitored in the reports and have heard about from the citizens and the affected families, all of them surely have a solution.”

“They only need some arrangement; however, the state will shoulder the biggest responsibility with regards to this support, which is primarily financial support to enable these families to stay on these lands and invest in them,” he added.

Assad said that there are many challenges; “the first is that the majority of the affected families have lost the current season, so, at minimum, we are talking about the loss of resources for one year, and there are families who have lost the trees, particularly the olive which need between five to eight years to grow. Facing the challenge of re-production will let people remain in this region with technical support, whether through seedlings or alternative plants.

“The other side is the human support, we have to bear financial burdens and help those families who have lost resources… the third challenge is that the families may sell the land because they have lost the trees, and of course there are persons who will attempt to exploit the needs of citizens to buy these lands and change them from productive lands into real estate.

Assad went on to say that those points are linked to each other and the main goal of the visit is to inspect details and be assured that the plans that will form in the coming days are realistic and reasonable one, which can feasibly be applied.

“As for forestry areas, as I know, the largest part of fires has affected the forestry.. more than 60 percent…now the fear is from uncontrolled building in those areas.. so there should be governmental decisions to strongly prevent any person from randomly building… these lands are national wealth,” said Assad.

Assad added that, “the catastrophe that took place is a national catastrophe in the human, economic and environmental sense… we want to support all the lands and areas, support every affected tree, family and each individual.”

Assad added that this visit is an opportunity to meet those kind people from whom we take strength, patriotism and also dignity.

“I want to avail this opportunity to salute the civil defense men … I was not able to meet them and they had a very effective and foundational role and we all know this fact despite the lack of capabilities… I thank them and thank everyone who has contributed to extinguishing the fires in a very short time in light of the capabilities…Of course, there is no need to talk about the role of the Syrian Arab Army, whether on the fronts with terrorists or on the fronts with fire,” the president said.

Assad also greeted journalists who have covered the news and conveyed the images of fires in a transparent and true way.

Assad continued his tour to include the Kfar Dabil area in the countryside of Jableh city where fires devoured a large part of the town’s forests and forestry.