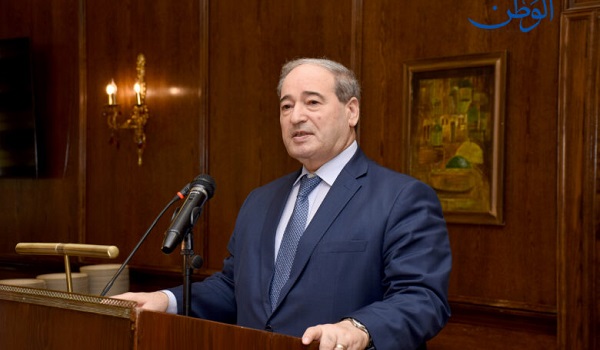 The Indian Embassy in Damascus held a reception marking the 150th birth anniversary of Mahamta Ghandi.

In a statement during the ceremony, Deputy Minister of Foreign Affairs and Expatriates Faysal al-Mikdad said that Syria is proud of its distinguished relations with India, the friendly country that supported Syria from the beginning in its war on terrorism. He stressed that Syria also backs India in its war against all forms of violence and supports its efforts to solve the existing problems through peaceful means.

In reply to a question by local newspaper “al-Watan”, Deputy Minister al-Mikdad said that “the reinforcements sent by the United States to serve its aggressive policies against Syria are not surprising and those who carry out these provocations know that their presence in Syria will not continue, and the support they provide for their cheap tools will come to an end.”

He also said that Syria will be a unified country and will confront these schemes that aim to serve the goals of Israel and its terrorist tools in the region.

“We are sure that it is better for the Americans to withdraw from Syria unconditionally and we call on all the tools of Washington, Turkey and others to join the national efforts being exerted to enhance Syria’s steadfastness and strength and solve the problems that we all face,” al-Mikdad pointed out.

On Turkey’s behaviour in Syria, al-Mikdad said that “Turkey has promised to open the “M4” highway a long time ago. We know that the Turkish regime under Recep Tayyip Erdogan is lying as it will not fulfill any of the commitments it has made to Russia. So, they must withdraw, just as the United States must withdraw from the Syrian territories.”