The YPG have been accused of supplying the regime with hundreds of trucks of oil, despite the practise being sanctioned by the US writes Nadaa Syria. 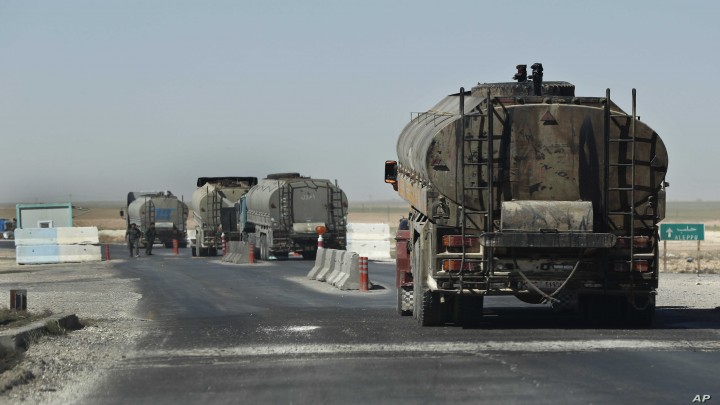 Media sources revealed that the People’s Protection Units (YPG) militia has been supplying the Assad regime with 500 trucks of oil per day, despite the Caesar Act, under which the US imposed sanctions on the Assad regime last June.

According to Anadolu Agency, 500 trucks loaded with oil leave daily from the areas controlled by the YPG in northeastern Syria and head to Assad regime-controlled areas.

According to the source, the trucks are owned by Syrian businessperson, Hossam al-Qatirji, who is loyal to the regime. The trucks are filled with oil from fields in Deir ez-Zor and Rmelan in Hassakeh.

The trucks are assembled in the al-Shaddadi and al-Mwasalat areas in Hassakeh and are then sent to the regime-controlled areas via the Abyad – Raqqa road, thus avoiding using the M4 international highway, so the operation remains secretive.

Anadolu Agency reported that the trucks crossed over into areas under the control of the regime via the al-Houra crossing in Raqqa, and reached the regime’s oil refineries in Homs.

The Caesar Act imposes sanctions on those who sell or provide services, technology, or critical information that facilitate or expand the local oil production of the regime, and on those who sell aircraft, parts, or related services to the regime’s military forces. It also sanctions those who provide construction or engineering services for the Syrian government, in addition to services related to reconstruction.