The White Helmets have offered their help to extinguish the raging fires in regime-held areas, Alsouria reports 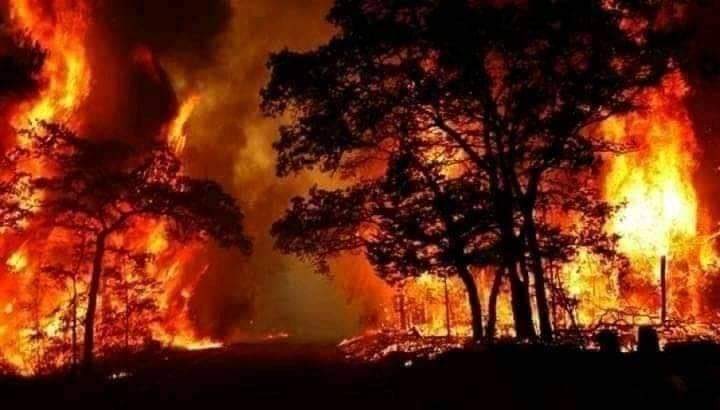 Fires persist in the Masyaf Mountains in ​​the Hama governorate for the fourth consecutive day, amid difficulties containing them. The fires have spread to populated towns in the western countryside of Hama, too.

SANA reported on Tuesday that rescue teams managed to extinguish some fires in the vicinity of the town of Ain Halakim, south of Masyaf in the Hama countryside, noting that there are hotbeds of fire that may come back to life.

The official Al Ikhbariya channel reported that the fire reached the town of Hazzour, near Ain Halakim, indicating that it approached civilian homes, after it devoured mountain forests.

Pro-regime websites indicated that most of the fire suppression operations are carried out manually by firefighting teams, due to the difficulty of bringing tanks to the area, knowing it is a rugged mountainous patch.

The fires started a few days ago in the forests of the eastern Lattakia governorate and lasted for three days. They ended up being controlled after they had spread across 20 locations in the governorate.

The fires reached the Hama governorate and the outskirts of Homs, where containing them was challenging, which resulted in displacing the population and great damage to agricultural lands and forestry.

The fires in Syria gave birth to the #SyriaisBurning hashtag which garnered a wave of solidarity through social media. The hashtag trended in Arab countries. Social media influencers expressed their solidarity with the Syrian people amid this natural disaster.

The Syrian White Helmets, which operates in northern Syria, announced its readiness to provide assistance in extinguishing the raging fires in Lattakia and Hama, which are controlled by the Assad regime.

They issued a statement today in which they said that the White Helmets, with its expertise and equipment, confirms its readiness to provide assistance in fighting fires and rehabilitating damages. This, however, is contingent upon a guarantee to ensure the safety of volunteers and allowing them to enter the area to reduce the damage, stop the spread of fires, and save civilians.

The damage resulting from these fires is not limited to a specific area and may extend to wider regions and threaten civilian gatherings, noting that the damage caused by the fires needs many years to be reversed, according to the statement.