Four-year-old Taim Shaduod has been given another chance, following a successful bone marrow transplant, which was donated by his sister writes SANA. 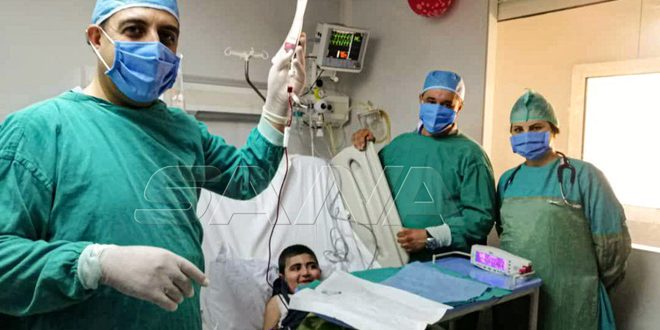 Undaunted by the long years of the terrorist war which Syria has passed through and the novel coronavirus pandemic, as well as the difficulties and challenges facing the medical cadres who are standing on the frontlines in the face of the pandemic, qualified experts in Syria haven’t been dissuaded from providing qualitative scientific medical achievements that serve patients and give hope for recovery. The latest has been the success of the first bone marrow transplantation surgery for a child at the Tishreen Military Hospital in Damascus.

“Four-year-old Taim Shaduod, has been suffering from aplastic anemia. He got his hope of recovery from his sister Lyn who is five-and-a-half-year-old as she donated stem cells to him,” Dr. Suleiman Suleiman, head of the Bone Marrow Transplantation Department and a specialist in hematology and marrow bone transplantation told SANA.

Dr. Suleiman said that on Jul. 30, 2020, Taim left the hospital without any clinical symptoms, with the return of blood elements, and the function of the kidney and liver to their normal status, and the child was provided with a health checkup plan at the hospital at a rate of two visits per week for clinical and in-vitro evaluation that will last for a one month after the transplantation, which is the first period to evaluate the success. On Aug. 9, 2020, the tests showed that 92 percent of the cells in the child, Taim, are from his donor’s cells, namely his sister Lyn, which proves the success of the operation.

Meanwhile, Dr. Balsam Maihoub, a pediatrician who is specialized in the field of hematology and bone marrow transplantation in children from Italy, said, “The child was medically diagnosed with aplastic anemia and requires the periodic transfusion of blood and all his blood cells are deficient and the condition was severe and he was taking immunosuppressive drugs without any improvement in his case, which requires a transplantation of the bone marrow in the event that there is a matching sibling.”

The happiness and pride due to the success of the qualitative medical achievement was accompanied by the joy of Taim’s parents. Bilal Shaduod, the child’s father, said while embracing his son, “Thanks to God and the efforts exerted by the medical and nursing staff, the operation was successful and the improvement is clear and it is something we dreamed of after a long suffering with illness.”

Taim’s mother, Ibaa, said that after consulting with doctors at Tishreen Hospital, a bone marrow transplantation surgery was recommended by the doctors and they have worked to prepare his sister, Lyn, psychologically to be the donor due to her young age, and they have encouraged and supported her to be able to help her brother. Idaa expressed thanks and gratitude to the entire medical and nursing staff at the hospital.