Hay’at Tahrir al-Sham is to impose further restrictions on the work of the media in Idleb, in an attempt to control activities and shape public opinion reports Shaam News Network. 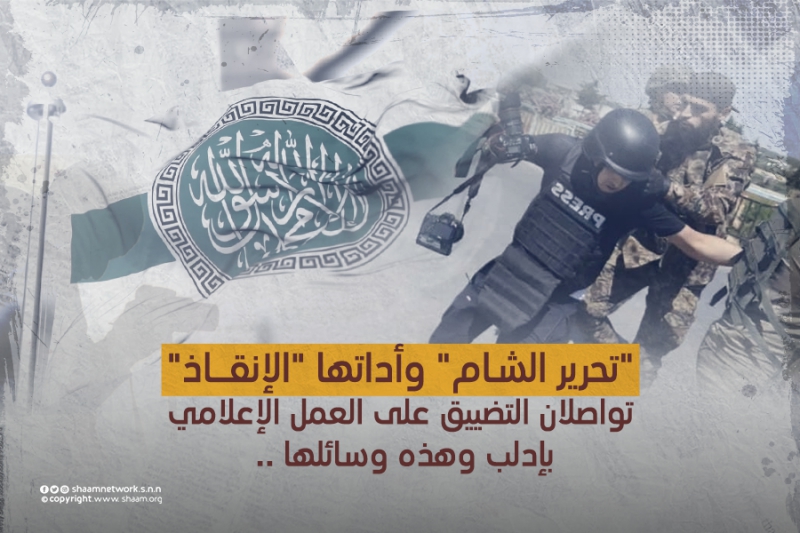 Hay’at Tahrir al-Sham and the Salvation Government have been using a selection of means and methods to restrict media activity in their areas of control, as part of a continuous attempt to spread its control and impose their hegemony on activists and the media corps as a whole.

The Media Relations Office of Hay’at Tahrir al-Sham, which is run by figures who use fake names, including non-Syrian figures, issued multiple decisions to exert pressure and intimidate activists, after realizing that carrying out arrests had major consequences that moved public opinion against them.

Among the decisions issued by these entities is obliging activists in all areas of their control to apply for a press card issued by the Media Relations Office in the Salvation Government, although there is no ministry of information in the so-called government. Moreover, those who refuse to present their card are being threatened with legal accountability and a possible suspension of their media activity.

The underlying plan aims to census the names and gather the personal data of activists in the liberated areas who are working in the media field as well as their addresses and the media agencies with which they are affiliated. This indicated that the card has a more security-oriented aim than a professional one.

As of late, the Media Relations Office has been keeping tabs on activists’ work through their official pages. Many alerts and warnings were sent to activists via fake and official numbers, regarding posts on Facebook or Twitter.

The office relies on the method of intimidation and threatening activists, especially those working with media institutions that contradict the political agenda of Tahrir al-Sham, and may oppose them and criticize their practices, claiming its keenness to work in the media and serve the Syrian revolution. This is used as a tactic to alert many activists of the need to cease work for these institutions and pressure them using promises as well as accountability and prosecution threats.

Shaam News Network learned, through several sources, that an official of the Media Relations Office in the Salvation Government, Molham al-Ahmad —  which despite being a fictitious name, is a well-known figure among Idleb activists — contacted many activists and warned them about continuing to work with several Syrian and Western media institutions, claiming that these institutions are not working in the interest of the revolutionary movement.

The authorities did not stop there; they continued to pressure a number of media activists through other means, including summoning them to formal and informal meetings, and following the method of carrot and stick, until their requests to part ways with the media institutions were met, and coercing them into making it look like they left voluntarily without interference by any outside party.

What is more, Tahrir al-Sham and the Salvation Government take advantage of any video clip broadcast through some media channels, including Russian media, to pursue activists. According to activists, those clips are often used as an excuse to pressure them.

According to Shaam’s sources, there is a long list of media institutions that are going to be targeted and whose employees are going to be suffocated and have their freedom restricted, including Shaam News Network, Aleppo Today, and Orient, in addition to Western agencies such as AFP. According to the sources, the media office is waiting for the appropriate time to carry out their plan.

Tahrir al-Sham and the Salvation Government are trying, through media relations, to attract activists in the countryside of Idleb by inviting them to attend so-called consultancy meetings with Tahrir al-Sham’s leader, Mohammed al-Jolani, meetings whose real aim is to try to get activists to support their media plan.