Tariq Mazaal arrived in Germany in 2015 and since then has secured an education, volunteered his time to help other and started his own organisation to help refugees writes Zaman Al-Wasl. 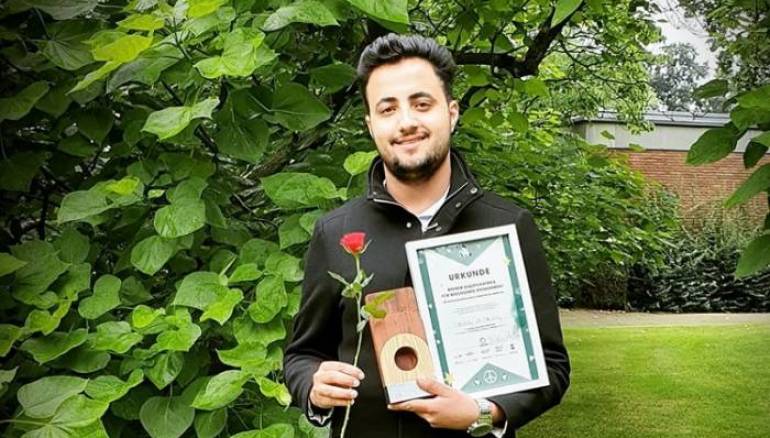 During a small ceremony at the Museum of Art of Cultural History in Germany, the Bremen State Government, in cooperation with the Federal Ministry of Economic Cooperation and Development, awarded Tariq Mazaal the Diaspora Prize in the Peace category for his efforts and volunteering work in Germany.

Mazaal, born in Deir ez-Zor, in 1999, sought refuge in Germany in 2015 without his family after the schools were closed in his city due to the war. Upon his arrival in Bremen, he learned German in a just eight months, despite the language being difficult for him and the rest of the refugees.

After learning German, Tariq was able to enroll in a school and complete his studies there. After obtaining his MSA certificate, he began vocational training in business administration in a number of companies, while at the same time, studying for his high school diploma.

Because of his fluency in the language, Tariq started helping other refugees by filling in their forms and documents, and accompanying them to government departments. He later volunteered in organizations that help refugees, such as AWO, Caritas, Fluchtraum, and Help a Refugee, which he joined in 2017. At the time, Tariq and a number of his volunteer friends thought of the idea for creating the Refugee for Refugee association to support other refugees.

According to Tariq, Shahanim Korko-Philip, a representative in the People’s Assembly in Bremen and a member of the Green Party, nominated him for the award.

Tariq Mazaal’s was awarded his prize in the Peace category for his volunteer work in more than one organization, and especially in his own association, Refugee to Refuge, from a number of nominees from African, Arab and other countries.

Mazaal was previously awarded the Citizens’ Award from Bürgerpreis Bank, which he dedicated to the Refugee to Refugee Association, as well as honored by the Minister of Social Business and Integration in Bremen.