The Syrian President and Foreign Minister have sent their condolences to Lebanon following the horrific blast that devastated the city reports SANA. 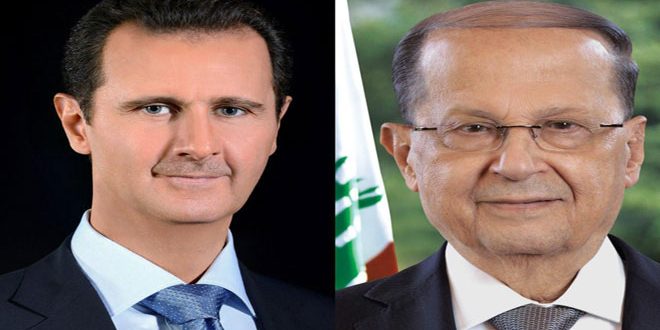 On Tuesday, President Bashar al-Assad sent a cable to Lebanese President, Michel Aoun, in which he expressed sorrow over the grave incident that hit Beirut Port, which left a large number of victims and wounded persons.

“On behalf of myself, and the Syrian people, we offer deep condolences to you and to the Lebanese people, asking God to have mercy on the victims and a speedy recovery for the wounded,” President Assad said in the cable.

President Assad added, “we affirm our support to brotherly Lebanon and our solidarity with its resistant people, and we are confident that you are able to overcome the repercussions of this tragic incident and rebuild what has been damaged as soon as possible.”

For his part, Syrian Foreign Minister Walid al-Muallem spoke with his Lebanese counterpart, Charbel Wahbeh, and expressed Syria’s “sympathy and solidarity with fraternal Lebanon” and expressed its willingness to help Lebanon “to overcome the effects of this tragic incident.”

Muallem said during the call, “the Syrian Arab Republic was deeply affected by the horrific explosion at the Port of Beirut, which claimed the lives of a number of innocent people and injured others and caused enormous damage to public and private buildings and facilities.”

Muallem also expressed, “deep sympathy and sincere condolences to the brotherly Lebanese people, the families of the bereaved victims, and wishes for a speedy recovery for the wounded.”

SANA added that, “the Lebanese Foreign Minister expressed gratitude for this fraternal position, which reflects the true relationship between the two brotherly peoples.”