A funeral for fighters, descended into a protests, with calls for the fall of the regime and for the expulsion of Iran reports Alsouria Net. 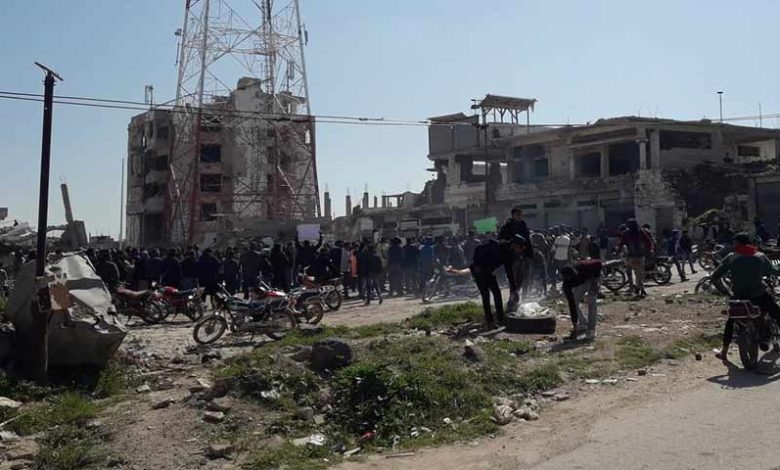 “Mass” protests broke out in rural eastern Daraa calling for the fall of the Assad regime and the expulsion of Iran from Syria. The demonstrations occurred during a funeral for Russian-backed Fifth Corps fighters who were killed in a bus explosion yesterday.

Thousands of residents of Busra al-Sham and surrounding cities and towns gathered on Sunday for the funeral of the Fifth Corps fighters, which morphed into a protest demanding the fall of Assad and expulsion of Iran.

Activists published video clips on social media of thousands of residents gathering at the funeral amid chants of “Long live Syria, down with Bashar al-Assad” and “Syria is free, Iran leave” and “Round up your dogs Iran, Daraa is nobler than Tehran.”

The Horan Free League said that, “thousands of people went out in a mass protest in Busra al-Sham in eastern Daraa, mourning nine Fifth Corps fighters and demanding the fall of the Assad regime, chanting against Iranian militias and Hezbollah.”

The protests were the largest of their kind since Assad’s forces, backed by Russia, seized southern Syria in 2018 following a resettlement deal with Free Syrian Army factions.

After the “settlement” in Daraa, the governorate was divided into two sectors. The first was under Russian hegemony, represented on the ground by the Fifth Corps, which is spread out in Busra al-Sham and some villages of rural eastern Daraa, and led by Ahmad al-Audeh.

The other sector is dominated by the regime security branches and military forces such as the Military Intelligence branch and the Fourth Corps, which is outside of Russia’s dealings, and which are centered on rural western and northern Daraa.

A military bus belonging to the Fifth Corps was hit by an explosive device on the Kuheil-Sahwa highway in rural eastern Daraa yesterday, killing nine fighters and wounding more than 25 others.

Activists blamed Iran and its allies in Daraa for being behind the explosion, with the aim of creating chaos after Russia’s attempt at expanding its authority in the area.

A military source in Daraa told Alsouria Net previously that Russia had begun recruiting more men into the Fifth Corps and was working to transport some of them to barracks in Homs city for training.

The source added that Russia is seeking to expand the control of the Fifth Corps to beyond Busra al-Sham.

Russia, “opened the door again for the Fifth Corps in southern Syria, and is now working to increase its numbers in Daraa and expand its influence outside of Busra al-Sham,” the source said.