Protests have persisted in Suweida, with crowds decrying Assad, the presence of Russia and Iran and the high prices reports Alsouria Net. 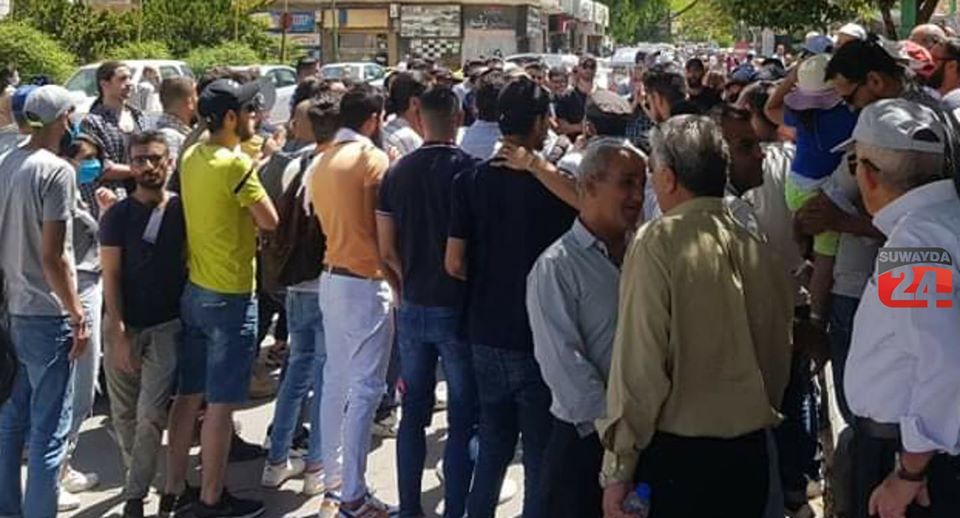 According to news site Suweida 24, regime security personnel arrested Raed Abdi al-Khatib on Tuesday, an hour after he took part in the anti-regime protest. The arrest reportedly happened in the office where Khatib works, in downtown Suweida’s Inji tower.

Tuesday was the third straight day of demonstrations in Suweida, protesting living conditions amid the collapse of the Syrian pound and rising market prices. Dozens of people gathered in front of the Suweida governorate building demanding Assad’s departure, raising political and economic slogans, Suweida 24 reported.

The protests began in Suweida on Sunday in front of the governorate building and continued through today. Demonstrators denounced the Assad regime and living conditions. They chanted a number of slogans, including “death not humiliation,” “Syria is for us and not for the house of Assad,” “Syria is free, Iran and Russia leave” and “God have mercy on your soul, Sultan, the country has become Iran.”

Dozens of residents also went out in protest in the rural Daraa city of Tafas on Sunday denouncing the rising prices and difficult living conditions, while blaming the Assad regime.

The pounds’s fall comes as the Caesar Act is set to go into effect this month. The measures are expected to increase the economic chokehold on the regime, leading to further deteriorating living conditions for residents, as the exchange rate today reached 3,100 pounds to the dollar.

The Caesar Act imposes sanctions on high-ranking officials and military leaders in the Assad regime and Assad’s family, as well as broadening the scope of economic sanctions on Syria to include major public sectors led by government personalities or any private companies supporting reconstruction.

This all comes amid silence from the Assad government and Central Bank, in addition to the lack of any measures to solve the deterioration of the Syrian pound except for strict rules banning the transport of large sums between governorates.