A number of leaders from Daraa were assassinated when they attended a meeting to discuss the deployment of regime checkpoints in western Daraa writes Alsouria Net. 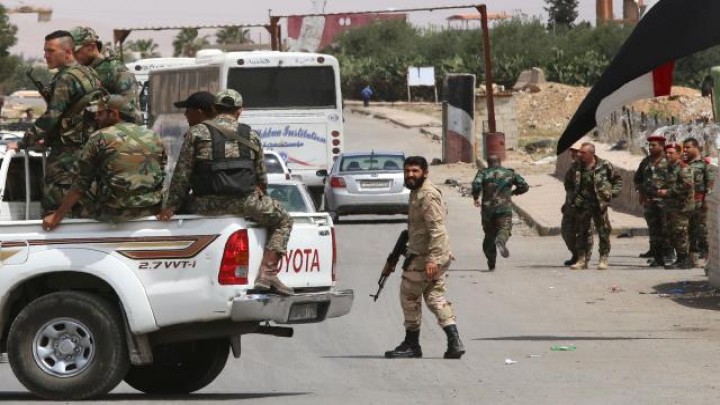 Prominent leaders from factions in western Daraa were targeted in an assassination operation by unknown assailants, leading to the deaths of three of them: Adnan al-Shambour, Rafat al-Barazi and Udai al-Hashish, while others were wounded, including one critically: Abu Murshed al-Bardan.

The source spoke on Thursday of security tensions in all of Daraa governorate, adding that tension was not limited to rural western Daraa where the assassination took place, but extended also to Daraa al-Balad, which is technically outside of the Syrian regime’s security control.

According to the source, any confirmation that the Islamic State (ISIS) was behind the assassination would place rural western Daraa in the binds of a new regime security position, particularly after the latter’s attempts to extend its influence there in recent days.

The party responsible for the assassination remains unknown, with some blaming ISIS and others blaming the Assad regime, the source said.

The Central Committee meanwhile imposed a curfew on Thursday in Tafas, in rural western Daraa, for “security reasons.” The measure was announced over mosque loudspeakers that morning, according to activists, while the committee warned against individuals violating the curfew.

Recent assassinations have targeted members of the Central Negotiations Committee in Daraa, including Ihsan al-Subeihi and Walid al-Barazi, while another member, Bassem Jalmawi, was wounded in another attempt.

Media sources told Alsouria Net that the targeted killings of committee members had extended to all areas of western Daraa, with a lack of any alternatives for handling the fate of the area in the coming days.

Prominent leaders from rural western Daraa factions were targeted with assassination by unknown assailants, with a number of them killed and wounded.

Hariri added that they had “been killed and injured.”

Media sources from rural Daraa told Alsouria Net that Udai al-Hashish had been killed immediately along with Adnan al-Shanbour and Rafat al-Barazi, while the condition of Abu Murshed al-Bardan was not yet known by time of publication.

Bardan, whose real name is Mahmoud Abdelqader, is a member of the Central Negotiations Committee due to the resettlement agreement in Tafas in rural western Daraa.

The media sources added that the assassination attack included gunfire by unknown assailants near the Kounsarwa Factory, on the outskirts of Muzeirib in rural western Daraa.

The attack comes amid tension in western Daraa, after Assad’s forces sent massive military reinforcements in recent days, hinting at a possible military operation to extend their security and military authority over the area.

The assassination also came after the killing of two regime military personnel by unknown assailants.

Daraa governorate has been under a state of security chaos since the signing of the resettlement agreement in 2018, while those responsible for the killings and explosions still remain unknown.

ISIS claimed responsibility for a number of killings in recent days, and has targeted former opposition leaders and regime commanders and personnel alike.