Residents in rural Aleppo have held demonstrations at the Ghazawiya crossing, demanding that they be allowed to cross, without harassment reports Enab Baladi. 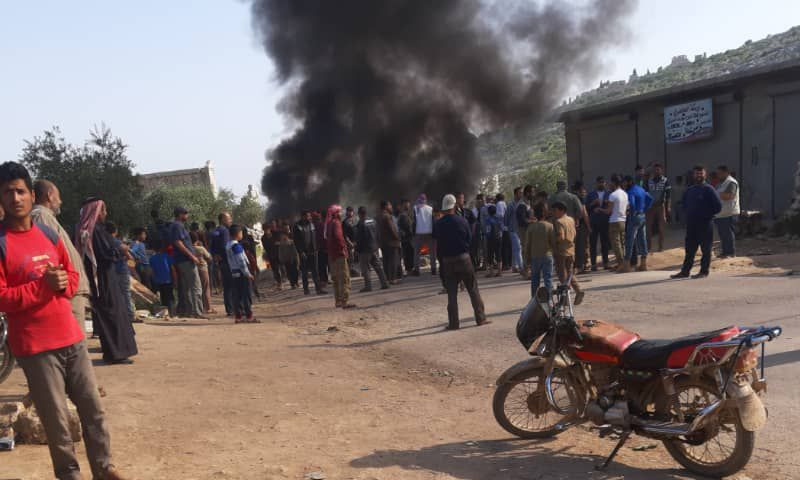 The Ghazawiya crossing connecting rural western Aleppo to Afrin saw protests from residents over their treatment by the crossing’s personnel, and for not allowing them to pass through.

An Enab Baladi correspondent in rural Aleppo said that residents of the area near the crossing, especially Darat Izza, protested at the crossing on Thursday, because they had to go to the Atma crossing in rural Idleb in order to cross into the Afrin area.

Media activist Abu Mujahid al-Halabi said on his Telegram channel that, “the Ghazawiya crossing in western Aleppo saw demonstrations by civilians from rural western Aleppo and Idleb, a result of the practices of Hay’at Tahrir al-Sham, and the extortion of people by taking fares from the poor and displaced going back and forth.”

Activists published videos of dozens of people gathered at the crossing, lighting tires and chanting “Syria is free…Jolani leave,” in reference to the leader of Tahrir al-Sham, Abu Muhammad al-Jolani.

Tahrir al-Sham did not issue any statement on the matter. A Telegram accounts close to Tahrir al-Sham said that, “Ghazawiya is a trade and military crossing and has no relation to civilians, while the Atma crossing is equipped for the novel coronavirus. Atma is the crossing responsible for allowing civilians in and out of Idleb.”