In light of the threat of the coronavirus, a group of women in Idleb have started to produce face masks, for distribution among people living in refugee camps reports Brocar Press. 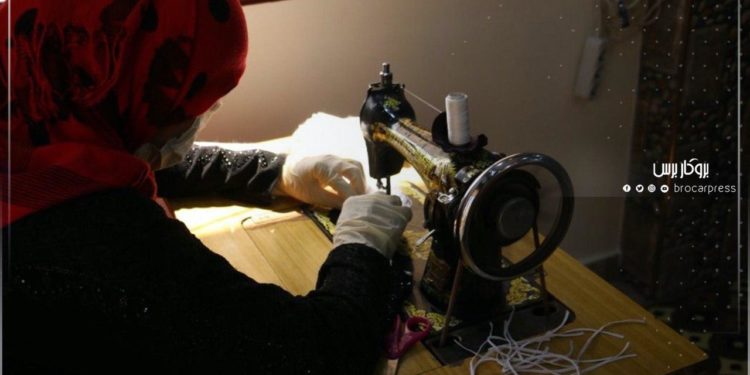 A group of displaced women from the southern Idleb city of Kafr Nubl have launched a volunteer campaign providing masks to people living in the camps of rural Idleb to fight against COVID-19 in northwestern Syria, where global health reports warn that the virus risks exploding at any moment.

Five women from Kafr Nubl who previously worked as seamstresses in the Mazaya Center—a part of the opposition-run Union of Revolutionary Bureaus—launched their initiative in April from the Kafr Nubl Hospital. Once located within Kafr Nubl, the hospital now operates in Armanaz, a town in northwestern Idleb. The women are making masks for the residents of displacement camps surrounding the northwestern town.

Narmeen al-Sweid, the team’s planning officer, told Brocar Press that the idea for the campaign was born from a lack of sufficient information among displaced people about the virus, and the danger of it spreading in areas that are difficult for aid organizations to reach.

“After we conducted a number of tests on the quality of the masks, we reached a good standard,” Sweid said, adding that the women have produced around 500 masks “that have been distributed to three camps in the town of Salqin, as well as nearby informal camps.”

“Not only has our team produced masks, but we have also begun to make hand sanitizer after consulting with specialists and accessing the materials we need to make it,” she added. The sanitizer “will soon be distributed alongside the virus awareness campaigns, as these camps are a ripe environment for the large-scale spread of the virus.”

A number of volunteer groups have been working on sterilization and awareness campaigns in various areas of Idleb, including the camps, since the start of the virus’ global outbreak. The initiatives are part of broader measures to prevent and guard against COVID-19 as local health organizations have yet to record any infections [in northwestern Syria], after conducting lab tests for more than 200 potential cases.