The lack of Islamic cemeteries and air transport, means that the families of muslims who die in coronavirus hit Italy face a difficult time ensuring an Islamic burial writes Zaman Al-Wasl. 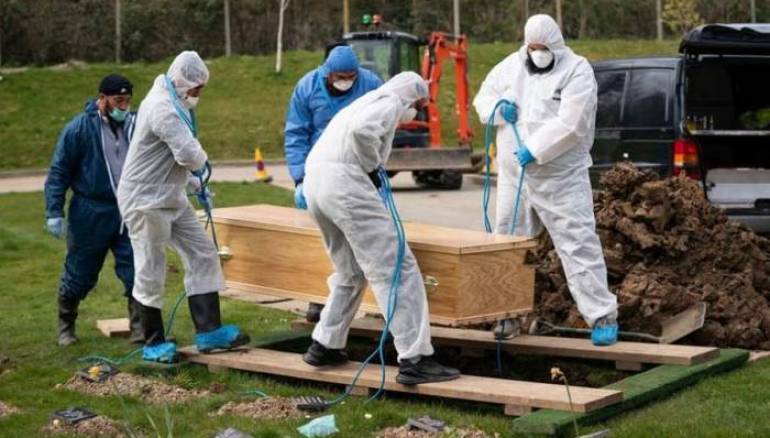 With the help of protective suits, masks and gloves, and the most precautionary measures, the 13-year-old Libyan child, Ismail Abdul Wahab, who hails from Brixton, in south London, was buried.

Abdul Wahab was one the youngest people to die of coronavirus worldwide. His mother and his six siblings remained in their home, attending the funeral via their mobile phones through a live broadcast that was captured by a relative, since most of them are under quarantine.

In Italy, refugees are not allowed to transfer the bodies of their dead to their countries of origin following the request of the dead or his relatives, as was customary. However, due to the lack of Islamic graves in all Italian cities, the Muslim community requested that the official authorities in the country address this issue.

Yassin al-Yafeai, who works as a cultural mediator and imam in the city of Piacenza, said there are dozens of bodies still in hospitals because of air and sea transport being stopped and prevented from carrying out their normal function; not all of them were coronavirus victims.

“There have been difficulties encountered by Muslims specifically since the pandemic spread, including those related to burial rituals like washing and shrouding the dead, and praying and burying the dead in light of what has become known as social distancing,” said Yafeai.

Religious institutions in Europe dealt with the current situation with harmony, and following the decisions of the authorities and the words of expert doctors regarding the transmission of infection and the precautions needed to prevent it; these institutions decided not to wash the dead and to use ‘tayammum’ instead, using gloves of course, and finally they decided the corpse will be shrouded, buried and prayed for from afar.

Yafeai regained the privilege of Islamic cultural customs of preparing the dead before the coronavirus epidemic, as hospitals provided rooms for the washers in which they washed the bodies, and then shroud them in the legitimate Islamic shroud; there are people who are buried in Muslim cemeteries across Italy and there are many who have their bodies returned to their countries of origin.

Donations are collected for this purpose, and some people decide to pay insurance for this specific purpose; if they die, insurance will transfer them to their countries. Now, however, in light of the difficulty and unavailability of flights, as well as maritime transport, transporting the bodies has become almost impossible.

Under these circumstances, the Federation of Islamic Organizations put pressure on the state to provide graves for Muslims in every city, and this request was met in most cities in Italy, pointing out that these graves may be an independent piece of land or may be part of a Christian cemetery in general; given the breadth of these Christian cemeteries, it can be possible to integrate Muslim bodies in them, and this is exactly what is happening now.

Yafeai also revealed that he had buried three Syrian refugee doctors Abdul Sattar Ayroud, Abdul Ghani Makki and Iyad al-Daqar in the city of Buchens, in which they used to reside.