With a curfew in place, many Syrian business owners are struggling to make ends meet, forcing them to continue operating in secret writes Brocar Press. 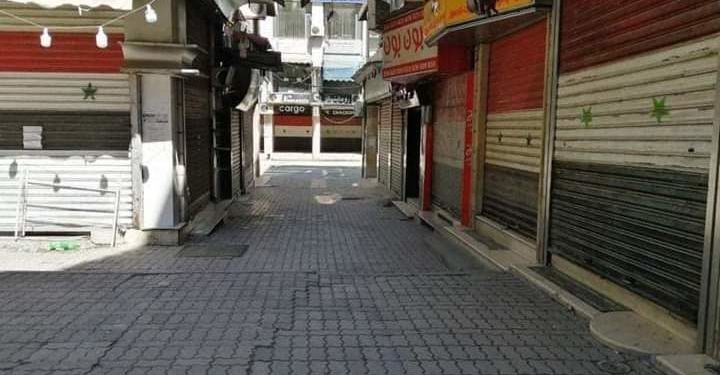 The recent precautionary measures imposed by the Syrian regime to fight the novel coronavirus has exacerbated the suffering of ordinary Syrian citizens and even shop owners who were left without any guarantees or compensations.

Under the new measures, all shops had to shut except for those selling goods and fast food, in addition to supermarkets and money transfer offices, leaving the owners of other shops facing poverty or forcing them to work secretly until the crisis is over.

Speaking to Brocar Press, Bilal al-Nazeh from eastern al-Jazira said he rented a shop with his brother to sell used clothes to support their families, however, now they are unable to pay the rent or even cover the shop’s costs.

Meanwhile, Muhammad, who used to sell and repair electrical appliances, has been sitting outside the closed doors of his shop to secretly sell lamps and other items before curfew.

For his part, Marwan who runs a sewing workshop, admits that work did not stop behind the shop’s closed doors, but they work in the basement to avoid drawing attention because he has commitments with several factories and his employees, who are paid by the week, have needs to meet and cannot afford to lose their jobs.

This is the reality of daily life for Syrians who are putting themselves and their families at risk of illness to earn a living, amid slow government action and the absence of guarantees.

This comes as the number of people infected with COVID-19 is expected to suddenly rise with the regime being accused of underreporting cases.

Meanwhile, the Syrian pound is declining significantly against the dollar and other major currencies, amid price hikes of commodities and goods.

The sharp decline in Syria’s pound against foreign currencies coincided with the stagnation and decline in the movement of markets and trade in various Syrian regions due to the preventive measures.

Economists believe that the Syrian pound may witness another sharp decline in conjunction with the bad economic situation in most countries around the world during the current crisis.

In June, many expect the pound to experience a sharp drop, coinciding with the implementation of Caesar Act in the same month.