The opposition have been dealt a heavy blow as the regime army attacked the southern and eastern outskirts of the Jabal al-Zawiya area and captured Kafr Nubl reports Al-Modon. 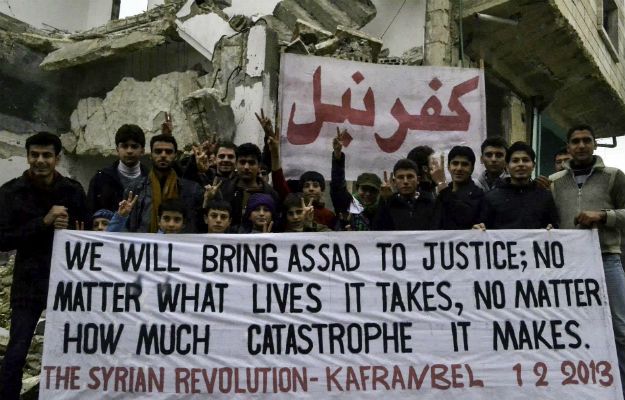 On Wednesday, regime forces and loyalists militias struck the Jabal al-Zawiya area in the southern Idleb countryside after taking control of more than 20 villages, towns and farms, which the opposition had been controlling in the east and west of the rugged mountain area.

The southern and eastern outskirts of the Jabal al-Zawiya area on Wednesday morning saw heavy fighting between the two sides. The attacking forces concentrated on the al-Futairah, al-Breij, Tel Ras al-Sheikh, Malajeh, and Kafr Mousa fronts. Ten other fronts also erupted, with a number of villages and mountain hills targeted on the Ras al-Harba approaching side.

Russian warplanes stepped up strikes around midnight the night before, until the early hours, striking villages and towns in the Jabal al-Zawiya area. They focused on the fronts and the advancing lines, with more than 200 strikes, carried out by swarms of warplanes. The attacks used targeted and incendiary bombs on fortifications with an unprecedented intensity, as well as cluster and vacuum bombs.

Regime forces and militias from the 25th Special Missions Division and the Fifth Corps and Fourth Division as well as Russian special forces, along with more than 20 armed formations took part in the attack operations, which used heavy land fire in preparation to invade the Jabal al-Zawiya area. More than 400 rockets and artillery rounds struck the mountain’s towns and villages, including Russian Smerch missiles, which weigh 800kg, as well as Golan and Tochka missiles, and traditional artillery and Grad and Katyushka rockets.

Regime forces and loyalist militias on Tuesday/Wednesday night took control over a group of towns and positions, the most important of which was the icon of the revolution, Kafr Nubl, and the surrounding villages. On the southernmost fronts the attacking forces took control of the villages of Baarbou, Deir Sunubl, and Qaaoura.

Regime forces and militias have benefited from the excitement of the attacking force backed by heavy land and air power in recent military operations. From the opposition perspective, the brutal bombardment has been the decisive factor in forcing them to retreat to the rear.

In addition to the heavy fire, there have been other factors, most important the failure in the management of the artillery operations and the absence of coordination with the factions in the area, as well as their failure to take advantage of the area’s rugged terrain in repulsing the attacks. On some fronts in the mountains, reinforcement groups have expressed a lack of readiness to actually withstand the attacks despite the logistical capabilities and geographical factors of the area.

The fronts on which the factions are fighting lack sufficient numbers of fighters to defend the area. The reason the area has been emptied of its fighters goes back to Hay’at Tahrir al-Sham’s policy, which caused the expulsion of fighters over the last two years, as well as the lack of anti-armor missiles and heavy weapons.

Sadness reigned in Syrian opposition circles after the loss of the city of Kafr Nubl, south of Idleb, to regime forces and loyalist militias. The loss of one most important strongholds of the Syrian revolution was a true shock. Kafr Nubl had long been connected to the popular movement against the regime since 2011. The opposition referred to the city as the “icon of the revolution” and demonstrations there started at the beginning of April 2011.

Since the start of military operations by regime forces in May 2019, air fire has begun to reach the city, which has been repeatedly targeted from the air, with warplanes carrying out multiple massacres. After the vanguard of the attacking forces reached the countryside of Maarat al-Nu’man and Khan Sheikhoun in the middle of that year, the intensity of the fire increased. In the last quarter of 2019, the city witnessed a large wave of displacement, and over the course of a year, the bombing caused the destruction of more than 50 percent of its buildings.

Regime forces and security branches suppressed the demonstrations in the city in the first months of 2011, and on Jul. 4, 2011, they took full control over it and carried out a massive campaign of arrests against activists and a large number of civilians who participated in the demonstrations. Then city residents fleeing from security grip and officers that defected from the regime army formed an armed battalion, which later joined the then-emerging brigades in Jabal al-Zawiya and northern Hama, which had a role in regaining control of the city and expelling regime forces on Aug. 10, 2012.

Kafr Nubl was known for its opposition to Jabhat al-Nusra and Salafi organizations early on. Its activists were persecuted and arrested, and demonstrations in the city demanded the exit of the al-Nusra Front repeatedly.