Russian military have stepped in and released two men who were arrested by the regime police and order that they leave the area reports Sowt al-Asima. 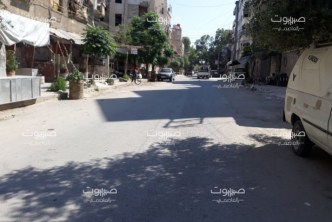 Sowt al-Asima’s sources said that Russian patrols composed of four vehicles stopped joint patrols of Douma police and military police at the gate of the al-Jalaa market immediately after the arrest of three young men from the city with the aim of forcibly conscripting them.

The sources said that a verbal dispute broke out between the Russian forces and the Douma police that ended with the policemen being expelled from the area and the Russian forces deploying at the market entrances, which lasted about two hours.

Sources said that the Russian police men released two young men who had been imprisoned, before they could be transferred to the city police section.

According to the sources, the military police carried out a campaign of arrests in Douma in coordination with the police department there with the aim of capturing those wanted for military service in the city.

This is not the first time Russian forces have expelled the regime intelligence and military police from Douma. Russian military police patrols stationed in the State Security branch on the city’s outskirts at the end of November expelled regime military police after they started arresting young men in the city.

The State Security branch previously expelled regime military police from the city in August 2019, after a decision by the Russian military police stationed there, following complaints that dozens of young men had disappeared at the hands of military police who then negotiated with their families for large amounts of money in exchange for releasing them and not sending them to military investigations on charges of evading service.

Russian military police at the end of December prevented Fourth Division soldiers from stationing in the Douma environs after they took control over commercial warehouses on the Masarba-Douma road with the aim of setting up a military point there. But the Russian patrols removed this point in the end.

Last September, regime forces replaced Republican Guard fighters and officers stationed at the Medical Tower checkpoint at the only entrance to the city of Douma facing the capital, Damascus, with others from the State Security branch, under direct Russian decisions and after the body of a murdered girl was brought into the city a few days ago.