More civilians have been killed as the regime army continues their advance in Idleb, against opposition forces reports Zaman Al Wasl. 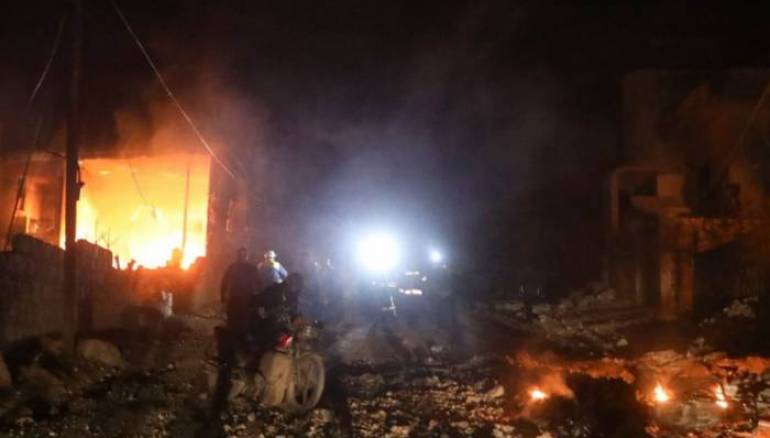 On Tuesday, three civilians were killed in fresh airstrikes on Idleb province as regime forces backed by Russian air power made swift advances in northern Syria, according to Zaman al-Wasl’s reporter.

The evening strikes hit the town of Termanin north of Idleb city.

Syrian opposition activists reported airstrikes on several rebel-held areas Tuesday, including the outskirts of the town of Atareb and Daret Azzeh.

The UN Human Rights Office said it recorded 298 civilian deaths in Idleb and Aleppo, where the regime offensive has been concentrated, since Jan. 1, 2020. It said 93 percent of those deaths were caused by the Syrian regime and its allies. In addition, 10 medical facilities and 19 educational facilities were either directly hit or affected by nearby strikes, the UN office said.

Meanwhile, the United Nations human rights chief urged Syrian regime forces and their allies Tuesday to allow safe corridors in conflict areas in northwestern Syria, where the offensive has unleashed a massive wave of fleeing civilians in one of the worst humanitarian catastrophes in the long civil war.

Michelle Bachelet told reporters in Geneva it was “cruel beyond belief” that civilians live under plastic sheeting in freezing conditions while getting bombed.

Her appeal came after a day after Syrian President Bashar al-Assad pledged to press ahead with a military campaign in the northwest that has displaced more than 900,000 people from their homes since the start of December, according to UN officials.

Many of the civilians are sleeping in open fields and under trees in freezing temperatures.

Backed by Russian air power, Syrian regime troops have made rapid advances, seizing dozens of towns and villages in Idleb province and nearby rural areas around Aleppo.