The Turkish army has sent a military convoy of armored vehicles into Idleb province and deployed between the towns of Binnish, Ma’ar Masrin and Taftanaz writes SANA. 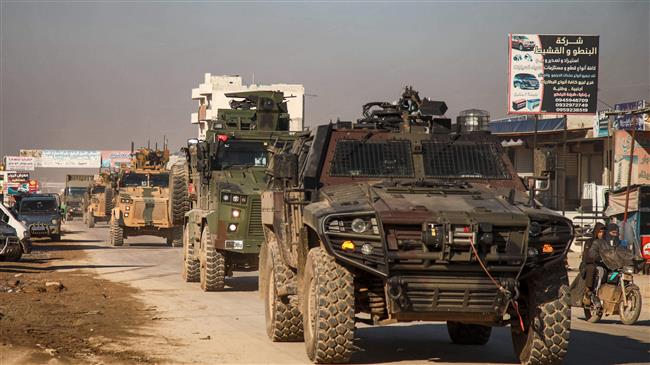 The General Command said in a statement that, “at 02:00 A.M. on Thursday and in a blatant synchronicity with the Israeli air aggression and even under its cover, a Turkish military convoy, which includes a number of vehicles and armored vehicles, passed from Oglinar area into Syria.

The statement noted that the Turkish military convoy, “deployed on the line between the towns of Binnish, Ma’ar Masrin and Taftanaz with the aim to protect terrorists, notably Jabhat al-Nusra, and to impede the advance of the Syrian Arab Army and to prevent it from completing the elimination of systematic terrorism, which besieges civilians in Idleb province and uses them as hostages and human shields.”

The statement added that the Army and Armed Forces General Command, “will continue its national tasks of defending the security of the homeland and the citizens, and it affirms at the same time the readiness of the Syrian Arab Army and its determination to confront the aggression regardless of its names and forms.”

On the same note, an official source at the Foreign and Expatriates Ministry said in a statement to SANA on Thursday, “Turkish forces, under the cover of the Israeli aggression breached the Syrian borders, and were deployed between the villages of Binnish, Ma’ar Masrin and Taftanaz in a step”. This, the official added, “affirms the unity of goals between the Turkish regime and the Israeli entity, which aim to protect terrorists, particularly Jabhat al-Nusra, and to impede the advancement of the Syrian Arab Army in Idleb and Aleppo and to prevent the complete defeat of their agents in Syria,”