Iran and Syria have discussed means to boost economic trade between the two countries, in the face of harsh sanctions reports SANA. 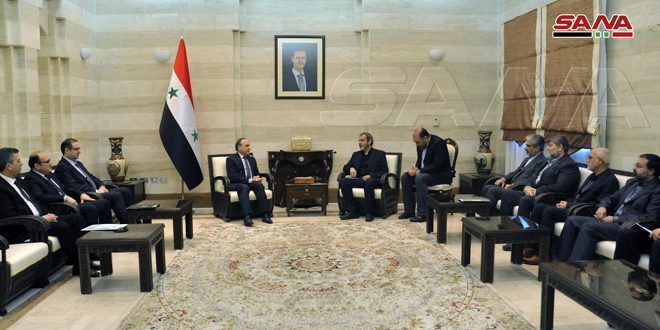 On Thursday, Prime Minister Imad Khamis discussed with Hassan Danaeifar, an advisor to First Vice-President of Iran and Secretary of the Joint Committee on Economic Development Between Iran, Syria, and Iraq and the accompanying delegation prospects of bolstering economic and investment cooperation between Syria and Iran aimed at facing challenges and sanctions against the peoples of the two countries.

Talks during the meeting dealt with mechanisms to overcome obstacles to implement agreements signed between the two countries and expand cooperation in investment, foreign trade, industry, infrastructure, housing, transportation, and the approved standards for commodity exchange.

Khamis said that the Syrian-Iranian economic relations are moving steadily towards further development, close cooperation, and openness, as part of the implementation of the directives of the leaders of the two countries.

For his part, Danaeifar reiterated his country’s stance in support of Syria in the war against terrorism, noting that the current stage requires developing cooperation in all economic fields in a way that serves the benefit of the two countries’ peoples.