Dr. Bashar al-Jaafari has lashed out at states that he claims are providing support to terrorists and said that Syria has pursued political solutions writes SANA. 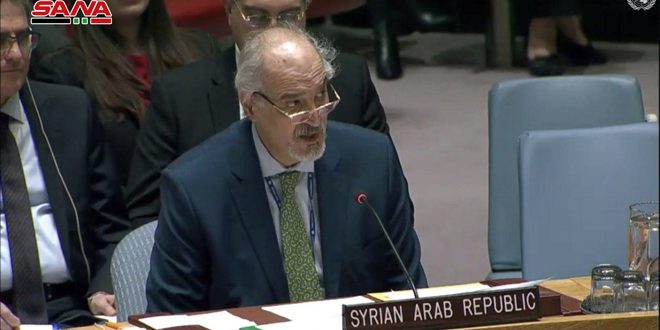 Syria’s Permanent Representative to the UN, Dr. Bashar al-Jaafari reaffirmed that restoring security and stability to Syria entails handling the main terrorist challenges, noting that some states are trying to impede the operations of the Syrian Arab Army against terrorism in Idleb and Aleppo, with the aim of raising the morale of terrorists.

During a Security Council session on the situation in Syria held Wednesday, Jaafari explained that the Jabhat al-Nusra terrorist organization is an al-Qaeda branch in Syria and the terrorist entities affiliated to them include tens of thousands of foreign terrorists among their ranks, and they control most of Idleb province and continue to attack neighboring areas and the army’s posts.

Jaafari said that Syria has pursued political solutions and that it has always dealt seriously with the “settlement” initiatives, including the understandings of Astana and Sochi, and it has adhered to these because of its keenness to protect the lives of the Syrians.

He added that the representatives of some countries are trying to circulate fabricated accusations with the aim of hindering the operations of the Syrian Arab Army against terrorism in the provinces of Idleb and Aleppo and raising the morale of terrorists.

Jaafari wondered what the governments of the representatives of these states will do if a terrorist organization occupied an area in their country and targeted civilians in the neighboring areas with rockets. Will they stand idly by, and will they accept someone calling the members of that organization “moderate armed opposition” and demand that humanitarian support is given to them?

He clarified that some states continue to invest in terrorism in Syria with the aim of prolonging the crisis in the country, and they seek to modify terrorists “genetically” and promote them as if they were “moderate armed opposition”.

He pointed out that throughout the nine years of crisis in Syria, four UN Special Envoys have tried to find a solution to the crisis, but they failed in their mission because some states preferred to rely on force instead of law.