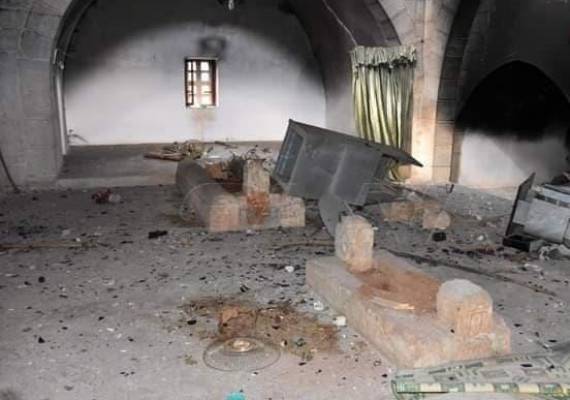 On Tuesday, a group of regime forces and militias burned the shrine to Caliph Omar bin Abdulaziz, the eighth caliph of the Ummayad dynasty, as well as that of his wife, after regime forces and their allies took control over Deir al-Sharqi village southeast of Idleb following fierce fighting with rebel groups.

Ana Press’s correspondent in Idleb reported that regime forces burned the building where the shrine was present after looting its contents, and then inflicted major damage in addition to burning multiple houses inside the village.

The correspondent said that regime forces looted some of the graves of Free Syrian Army fighters who died in earlier fighting with regime forces on various fronts of the Idleb countryside.

The Maarat al-Nu’man area south of Idleb is considered to be very culturally rich, with dozens of historic sites, in addition to the shrine of the poet-philosopher Abu Alaa al-Maari, in the city itself. A few kilometers to the east, specifically in the village of Deir Sharqi, there is the shrine of the Ummayad Caliph Omar bin Abdulaziz, who some historians called the fifth rightly-guided caliph.

Regime forces took control over the Deir Sharqi in the Maarat al-Nu’man countryside south of Idleb a few days ago after fighting with rebel groups which used a variety of heavy weapons as well as warplanes.

Regime forces and allied militias on Tuesday took control over Maarat al-Nu’man entirely after fierce fighting with rebel groups which ended with the regime taking control after dozens of dead and wounded in the attacking forces.