As the regime continues to advance into Idleb province, Turkey is making no efforts to stop their progress or help the civilians who are fleeing reports Enab Baladi. 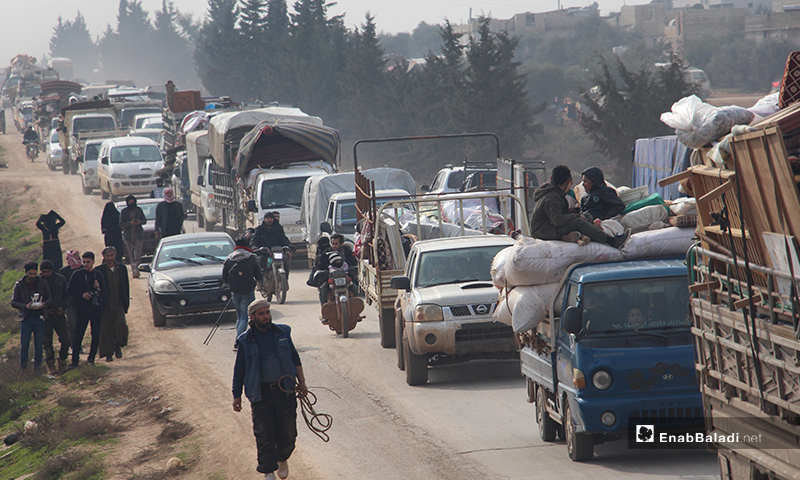 The Turkish Defense Ministry has ignored the advance of Syrian regime forces in Idleb and has vowed to respond to any threat against its observation positions in the area.

The ministry said in an official statement on its website on Tuesday, that it would, “respond to any attempt to endanger the security of observation points operating within the scope of the Astana and Sochi agreements, severely and without any hesitation, within the framework of legitimate defense.”

The ministry added in a statement, translated by Enab Baladi, that the regime was continuing to kill civilians with land and air attacks despite the “truce” that was declared on Jan. 12, 2020, in addition to displacing hundreds of thousands from their homes amid difficult winter conditions causing a “major humanitarian tragedy” in Idleb.

This coincides with the increasing severity of the battles in the western Aleppo countryside following repeated attempts by regime forces to advance in the area, which were repelled by rebel forces which announced that they had killed dozens of fighters from the regime forces and militias.

Regime forces backed by Russian warplanes carried out a military attack on the eastern and southern Idleb countryside, and took control over a number of areas over the last few days.

After managing to cut off the international Damascus-Aleppo M5 highway, it took control over a number of towns on the outskirts of Maarat al-Nu’man.

Enab Baladi’s correspondent reported that regime forces had taken control over the villages of al-Zalana, al-Dana, al-Babila, al-Souma’a, Tel al-Sheikh, Masran, and the Rodoco area south of Khan al-Subl on the highway.

The advance has led to a large displacement in the area, with the Humanitarian Response Coordinators documenting the displacement of more than 10,000 families from the areas of Ariha and Saraqeb and Khan al-Subl over the last 48 hours.

The number of people displaced in northwestern Syria in January reached 28,852 families, a total of 167,131 people.