Students in Suweida are continuing to protest about the ongoing economic problems and the rampant corruption that is present reports Al-Modon. 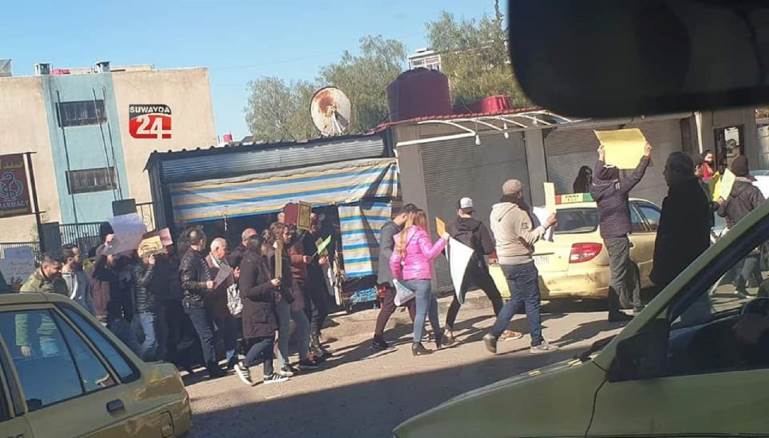 The Education Faculty Department in Suweida and the city’s Student Union threatened students with dismissal if they took part in protests, which are occurring in the city under the slogan “We want to live” with the aim of fighting corruption and improving the economic conditions in the country in general and in Suweida in particular.

Organizers of the campaign responded to the threats on their Facebook page, saying: “To the students and security forces and all people who have not seen our civilized image in the streets: We will remain peaceful and we do not want anything but a livelihood and rights that we obtain safely.”

The organizers said that the campaign was not religious or political and that it would not accept being neutralized from its basic demand for a dignified life and for an improvement in the living and security situation that includes all Syrians regardless of religious affiliation, peacefully rejecting violence, and preserving all state property, without political, ethnic or sectarian partisanship.

The page on Facebook has attracted more than 32,000 members, including regime loyalists and opposition members, as well as members outside the country, in what may be the first such occurrence of its kind in Syria, in terms of organizing a specific event that includes most segments of Syrians in a tacit agreement about the importance of mobilization and remaining neutral between the two “opposition and regime” sides to ensure its continuation and expansion.

A source in Suweida told Al-Modon that for the eighth time, dozens of young people gathered in various parts of Suweida in front of the governorate building, as well as in Shahba and the Education Faculty, to protest about the current economic situation. The source said that the general status of the protesters was close to completely neutral, given that the organizers of the campaign through their slogans tried to keep the same distance from the “opposition” and the “regime,” in a desire to get popular support and expand the scope of the protests across the country.

The source said that the timing of the campaign and the conditions under which it occurred were extremely important, with Suweida having a particular religious character, and is categorized as a religious minority governorate. Therefore the regime has not been able to make accusations against the protests being linked to extremists and terrorists, as occurred in other areas that saw peaceful protests at the start of the revolution.

While the regime claims to protect minorities, today those minorities are going out on the streets rejecting its policies and demanding change, even if it was not directly or explicitly. The Assad regime tacitly understands that if the campaign continues, then the slogans will escalate until they call explicitly for its downfall.

The regime also fears the protesters returning to the streets, and then the fear barriers breaking another time in the areas under its control, especially if it continues in its security approach to all those who oppose it, and all those who raise their voices calling for even the lowest rights.

After multiple protests in Suweida, the Political Security branch in the city summoned a number of young people for investigation. This was confirmed by Rian Maarouf, editor of the Suweida 24 Network to Al-Modon, saying that the head of the Political Security branch, Col. Rafiq Shaaban, had over the last week summoned the young people for investigations in the branch offices about the reasons they went out to protest and about who was behind these protests and pushing them to go out to the streets, as well as about the most prominent organizers and their political leanings.

The regime has not yet mobilized any security reinforcements to the city to meet the protests, but centers such as the governorate center and other government buildings in the governorate have seen a heavy security presence in their environs.