The weekend's events were dominated by the recent assassination of the Iranian military commander of the al-Quds forces, Qassem Soleimani. Catch up on everything that happened. 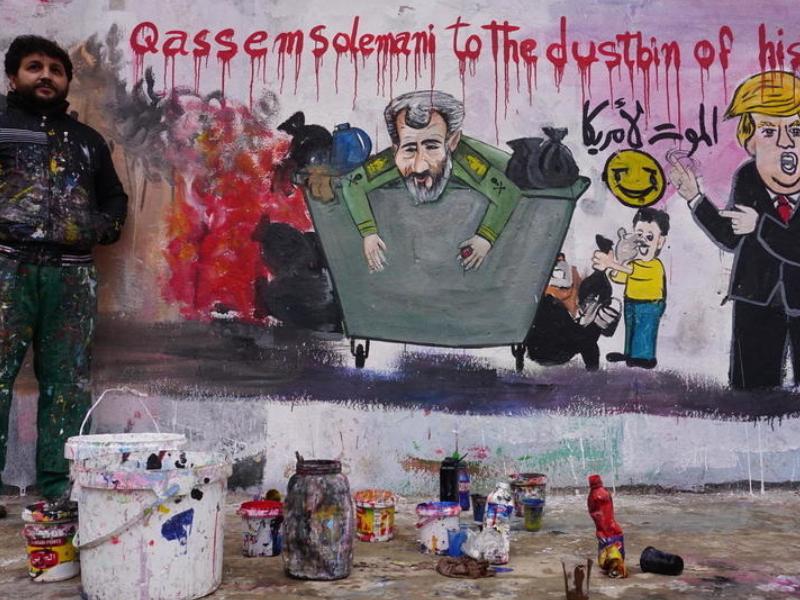 The killing of the Iranian military commander of the al-Quds forces, Qassem Soleimani, is another example of the deep divisions between the Syrian people.

On Friday, Syrians in opposition held areas celebrated the death of a man they hold responsible for the deaths of thousands of civilians. During a weekly Friday protest in the northwestern city of Idleb, one demonstrator held a placard that read: “We rejoice in the death of the terrorist Qasem Soleimani. Thank you Trump.” AFP referred to this person as Mohamed Shkeib and quoted him as saying, “This piece of good news will encourage us to keep advancing, God willing, the revolution will continue and the revolution will triumph”. Several displaced Syrians told Middle East Eye that they were celebrating because under Soleimani’s instruction, pro-regime government forces besieged a number of rebel-held towns and cities, starving them into capitulation. “We ate cats during the siege and residents exchanged their cars for a couple kilograms of rice,” said Burhan, a civilian who fled the city of Zabadani in the Damascus countryside to Idleb. At a refugee camp near the border with Turkey in Aleppo province, another group of men on Friday had a sign saying “Thank You Trump” next to a tray of sweets set up for people to pick from. Soleimani was considered the architect of Iran’s deployment and policy in Syria, where he backed Syrian government troops in the nine-year conflict. On Facebook, posts flared with rejoice. An activist and writer, Khalil Haj Saleh, wrote on his page, “I wish he was killed by a Syrian; I wish he was killed in Aleppo or Deir ez-Zor.” Another writer, Khidr al-Agha, wrote, “This is a victory for justice, a nice breeze that blows to cool the souls of the Syrian martyrs”, a third commentator wrote, “Qassem Soleimani is on his way to hell. He has killed hundreds of thousands of Syrians, Iraqis, Iranians, and Americans. He is not going to be missed.”

Meanwhile, the Syrian regime condemned the killing of top Iranian and Iraqi commanders in a US strike, which was hailed by the country’s opposition. Syria is, “certain that this cowardly US aggression…will only strengthen determination to follow in the path of the resistance’s martyred leaders,” a Foreign Ministry official was quoted as saying by SANA. The official described the killings as “a serious escalation of the situation” in the region and accused the United States of resorting to “the methods of criminal gangs”. The unnamed official said the strike was, “part of the [US] policy aiming to create tensions and fuel conflict in countries in the region”.  President Bashar al-Assad lamented Soleimani in a cable to Iran’s supreme leader saying, “the martyr Soleimani will remain immortal in the consciences of the Syrian people, who will not forget his standing by the Syrian Arab Army in its defense of Syria against terrorism and its backers.” The Syrian people, “will not forget that he stuck by the side of the Syrian Arab Army,” Assad said. “The memory of the martyr Soleimani will remain immortal in the conscience of the Syrian people,” he added.

Over the weekend, SANA almost exclusively covered and mourned Soleimani. Published stories covered, statements of condolences from politicians, funeral processions in Iran and Iraq, anti-war demonstrations in US cities, the end of the US presence in the region and the funeral of Soleimani.