Over just four days, Idleb witnessed 420 strikes on more than 30 areas in the southern and eastern and western Idleb countrysides reports Baladi News. 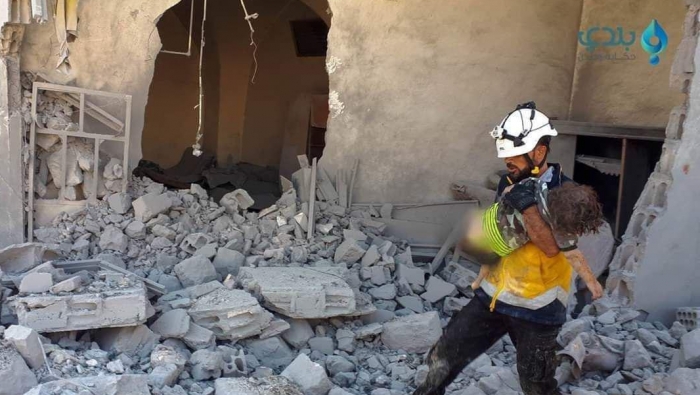 On Wednesday, the Syrian Civil Defense forces issued a statement in which it counted 113 civilians martyred and wounded during bombardments by Russian and regime warplanes, with 420 strikes on more than 30 areas in the southern and eastern and western Idleb countrysides over the period from Dec. 15-18, 2019.

The statement said: “More than 30 areas in the southern and eastern and western Idleb countryside were hit with more than 420 strikes. Russian warplanes carried out 79 strikes and 110 were carried out by Assad regime warplanes, as well as 76 barrel bomb strikes by helicopters and 106 artillery strikes and 49 surface-to-surface rocket attacks.”

The Civil Defense counted three massacres against civilians during the recent military campaign between Dec 15-18, 2019, during which 113 civilians were killed or wounded.

The air campaign has created a huge displacement with more than 70,000 people fleeing from Maarat al-Nu’man and its eastern countryside in southern and eastern Idleb during this period, according to the Humanitarian Response Coordinator director.

The Civil Defense has warned of a humanitarian disaster threatening the lives of more than 100,000 civilians living in the Maarat al-Nu’man area because of the continuing bombardment and the blockade by warplanes and the striking of their vehicles when they try to escape death.